In the weeks leading up to the February 28 announcement of the 2012 NBCC award winners, Critical Mass highlights the thirty finalists. Today in our series, NBCC board member Karen R. Long offers an appreciation of nonfiction finalist Why Does the World Exist?: An Existential Detective Story (W.W. Norton) by Jim Holt. 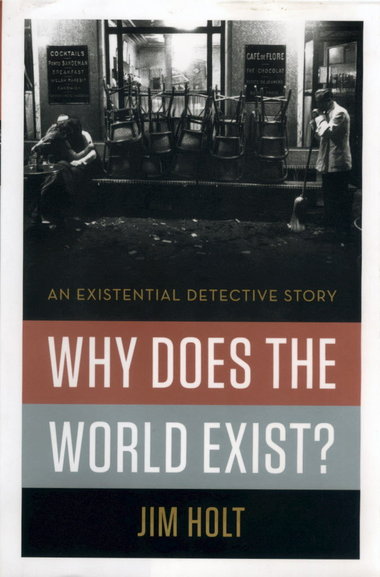 His first book was a nerdy, tidy history of gags called Stop Me If You've Heard This. Four years later, he crafted the decidedly more ambitious Why Does the World Exist? into a crisp and consuming look at a question William James called “the darkest in all philosophy.”

Holt manages this by letting in the light — through John Updike's sense of the universe as light verse — to the humor Holt finds in cosmology.  Sir Fred Hoyle, for instance, was dismayed by the undignified concept of everything originating in as an explosion roughly 14 billion years ago, rather like “a party girl jumping out of a cake.” Sardonically, Hoyle described this sixty years ago on the BBC as “the Big Bang.”  The phrase stuck.

Readers who relish the sense of their own wits sharpening are rewarded by such chapter headings as “Could Our World Have Been Created by a Hacker?” Because ultimate questions are unanswerable, much of the pleasure here rests in turning them over, in knowing kinship with physicist Stephen Hawking, who plaintively wrote, “What is it that breathes fire into equations and makes a universe for them to describe?  Why does the universe go through all the bother of existing?”

Holt undertakes an assiduous hunt to scour up some answers. He ruminates, yes, he loves numbers, true, but he hits the pavement, too, reporting his conversations with original thinkers to strong effect. The book becomes a winning pilgrimage as Holt travels to interrogate a clutch of scientists and philosophers. After each visit, he sifts the exchange like a miner.  In this way, Holt locates a fertile seam: picking physicists like Steven Weinberg who have philosophical leanings, and philosophers like John Leslie who know their way around a Higgs Boson.

Not content to merely hold the coats of giants, Holt supplies his readers with an autobiographical hand to hold.  The author politely stepped away from his Catholic inheritance in the Shenandoah Valley, and reports that he had the predictable teenage crush on the existentialists before becoming “infatuated by pure numbers.” He puts the traces of these dalliances to work, taking readers along to sit in nighttime Paris at a table in Cafe de Flores, once the haunt of Jean-Paul Sartes and Simone de Beauvoir.  He represents a few thoughts in equations.  And he writes, “even today, when we ask why there is something rather than nothing at all, we are, wittingly or not, heirs to a way of thinking that is a vestige of early Judeo-Christianity.”

The specific lineage, however, is surprisingly recent, dating to Gottfried Wilhelm Leibniz in 1714, when he poised the question of non-being.  Earlier philosophers fixated on what the universe was made of, not why it existed at all. Holt carries Leibniz's question first to Pittsburgh,to see the eminent scholar Adolf Grunbaum, “grinning amicably and looking like an octogenarian cross between Danny DeVito and Edward G. Robinson.”

The formidable Grunbaum has no truck with awe. “There is no reason, in his view, to be astonished, puzzled, awed, or mystified by the existence of the world,” Holt writes. “None of the virtues claimed by Nothingness — its supposed simplicity, its naturalness, its lack of arbitrariness, and so on — made it the de jure favorite in the reality sweepstakes: such was his conviction. In fact, if we look at the matter empirically — the way modern, scientifically minded people out to — we'd find that the existence of the world is very much to be expected.”

Grunbaum's opposite number is the angular and mild Richard Swinburne, who serves up God at Oxford. Grunbaum gives Holt gin; Swinburne pours tea. Holt pays close attention to the men's arguments, their faces and their food.

Indeed, one lovely technique in this book is its nimble oscillating between the concrete and the abstract. In one concise passage, Holt muses on the pertinence of set theory to nothingness; elsewhere he praises the pleasure of stewed tomatoes.  He hits us with Martin Amis' speculation that “We're at least five Einsteins away” from answering the title question. He gives us physicist Alex Vilinkin's  elegant attempt at visualizing nothingness: “a closed spherical spacetime of zero radius.”

Loose-limbed and beautifully phrased, this is a book of ontological boldness, a book to spur more reading.  “The effort to understand the universe is one of the very few things that lifts human life above the level of farce,” the melancholy Weinberg tells the author, “and gives us some of the grace of tragedy.”

It is Holt's genius that he keeps the comedy close at hand.