In the weeks leading up to the February 28 announcement of the 2012 NBCC award winners, Critical Mass highlights the thirty finalists. Today in our series, NBCC president Eric Banks offers an appreciation of criticism finalist Stranger Magic (Belknap Press) by Marina Warner. 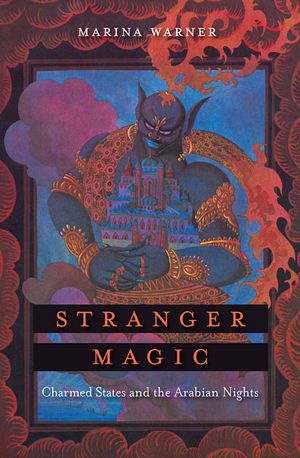 “My Peri! ever welcome here!”—Lord Byron, The Bride of Abydos

Here’s a maddeningly looping tall tale about the enchantment of story telling that has cast a spell over readers and writers for centuries: A sultan, incensed to murderous rage by an act of cuckoldry, orders a new bride to be presented to him each night and summarily beheaded the following morning. The daughter of the vizier, knowing what awaits her should she fail, hatches a plan with her sister. She will accompany her into the sultan’s bedroom, and begin to tell him a tale. When the morning breaks, when “the time for speaking is over,” the sultan finds himself so charmed by the story she tells and so eager to hear how it turns out that the execution is stayed for one more evening, and one more, and one more. The storyteller, Scheherazade, wagers with her neck that literature can stave off death, and against the longest of odds, the marvelously recursive Alf Layla wa-Layla, or The Thousand and One Nights, or the Arabian Nights, is both the proof and the payoff of her long-shot gamble.

In her ebullient Stranger Magic: Charmed States and the Arabian Nights, Marina Warner is no less eager than Scheherazade, or Shahrazad, to get to the punch line, because she reckons that one of the marvelous things about the collection of tales––which first became an object of Western fantasy upon the translation in seven volumes by the French Orientalist Antoine Galland in 1701–1706—have neither proper beginning nor conclusive end. Frames within frames, stories about stories, each tale reflecting and refracting each other, they present themselves with the oneiric logic of enigmas. Their hosts of jinns, peris, marids, and afrits are often morally ambiguous, spliced against themselves in loyalties and aspirations, able to turn on a dime in a story whose plot, such as it is, whips off in unexpected directions as rapidly as its protagonists, from lowly merchants to treacherous viziers to all-powerful sultans, find that their good fortune is fickle. Luck runs out. Fate is sudden—but oddly reversible. The magic that objects might bring slips away when carpets and keys and carnelian rings pass into another’s hands. Like those who would master the objects of what Warner calls this enchanted “thing-world,” whenever we think we have a handle on these stories, we’re wrong. Possession is nine-tenths of the flaw.

With Stranger Magic, Warner has written a nimble but daring work of criticism that draws on her work as a novelist and scholar, combining aspects of literary history, formal analysis, personal essay, and cultural forensics into topics as disparate as the “Smyrna rug” that draped Freud’s couch to the flying turtles that Danish artist Melchior Lorck sketched in the 1550s. It’s a remarkable feat of synthetic knowledge, with particularly rich forays into those whom the Arabian Nights provided both fantastic inspiration and parodic “cover”: from Voltaire, Goethe, who taught himself Persian to compose West-Eastern Divan, and William Beckford to such unexpected veins of influence as Sir Walter Scott. There are historical personages both familiar (Richard Burton, Edward W. Lane) and less so (John Wilkins, Robert Patlock) brought into an encyclopedic sweep of French, German, and British sources. Even given the thoroughness of her investigation into just how deep an impression Orientalist fantasies left on eighteenth- and nineteenth-century literature, especially after the Napoleonic invasion of Egypt, she offers an inspired reading of why it was cinema—particularly the phantasmagoric chic-of-Araby “Easterns” of the early silver screen—that offered a germane new life to Aladdin and Ali Baba.

Of course, Aladdin wasn’t to be found in the corpus of fourteenth-century Syrian texts that Galland translated; he likely authored them himself. Warner cites the well-known quote by Borges on The Arabian Nights: “I think the reader should enrich what he is reading. He should misunderstand the text; he should change it into something else.” I’ve read this quote many times without, before Warner, understanding the full depths of Borges’s oracle. In Stranger Magic, she herself has transformed the Arabian Nights into a larger story of reciprocity, exchange, and circulation, the tales like money passing from hand to hand. Her reading offers a friendly against-the-grain homage-in-response to Edward Said’s Orientalism, one in which the exchange between “East” and “West,” never free from asymmetrical weights, nonetheless obeys a more fluid pathway than in his dominating equation of power and knowledge. The stranger in her title does double-duty here, as it is the uncanny figure of the stranger, that Said-like exhilic figure who comes from elsewhere and seems nowhere at home, who animates these stories, both in their inner logic, their propagation, and the long shadow across European and non-European cultural history. Interlarding her book with several examples of the tales, demonstrating how the enchantment of Shahrazad’s bed-time stories subtly co-exist with the purported disenchantment of the world, Warner has created a sparkling work of criticism, full of graciousness, learning, and fascination. Like Byron’s peri, ever welcome here!

Review by Wendy Doniger in the Times Literary Supplement:

Review by Robin Yassin-Kasab in The Guardian:

Review by Brad Gooch in the Daily Beast:

Review by Steven Connor in the London Review of Books:

Review by Michael Dirda in the Barnes & Noble Review: