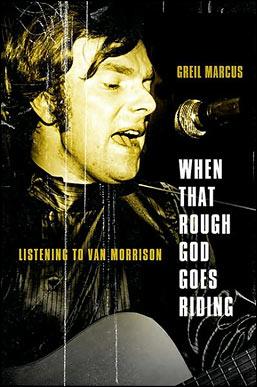 When we asked NBCC members to list their favorite books about music, it was no surprise that the most commonly cited author was a critic: Greil Marcus has taught a generation how to write and think about music, and showed how an astute critic can integrate a discussion about a song into a broader conversation about American life. (Though as it happens, Marcus has never been nominated for an NBCC award.)

My favorite book about music comes down to an impossible choice between two Greil Marcus titles: Mystery Train and Invisible Republic (later editions of which are entitled The Old, Weird America). Marcus' prose in these two books sometimes achieves the sublime heights and plumbs the murky depths of the music he contemplates: the Sly Stone of there's a riot goin' on, Elvis, Dock Boggs, Clarence Ashley, the Band, Bob Dylan in full-on trickster mode, and on and on.

One of Diann Blakely's top two picks was a Marcus work:

In alphabetical order, Mystery Train and The True Adventures of the Rolling Stones. No prejudice here: I wrote about both books in 2001, before knowing the author of either and marrying one (Booth). Marcus and Booth, respectively, are the Emerson and Thoreau of writing about vernacular American culture; if the former swirls, with nonpareil intellectual charisma, through literature and history, the latter takes us on a journey fueled by that peculiarly indigenous blend of hedonism and the ideal, losing both–losing everything–but both authors allow us to find, and keep, what we may.

A lifetime in publishing and bookselling combined with the limited space of a city apartment-dweller means that I am forced to get rid of most of the thousands of books that have passed through my hands and mind, the exceptions being volumes that somehow have accumulated totemic emotional importance. Somewhere in my parents' house is a battered copy of the 1979 Knopf paperback edition of Stranded: Rock and Roll for a Desert Island, in which Rolling Stone writer Greil Marcus asks a Murderer's Row of rock writers — Lester Bangs, Ellen Willis, John Rockwell, Dave Marsh — the ultimate parlor game question, and then supplies his own annotated and highly idiosyncratic discography, a kind of ur-canon for the rock genre. As a teenager in a small town with only one pallid Top Forty radio station to keep me company, I felt stranded myself; the book was a lifeline, an education, a statement of solidarity, an expression of faith. It taught me how to think and write about music, and therefore about life; in some small way, everything I have done since is an attempt to imitate the voices — sardonic, knowing, passionate — that I first heard in Stranded.

This book forms a lyrical, interpretative ramble (more than a biography) as it discloses a Morrison childhood home crammed with John McCormack recordings as well as blues, folk, rock, and party tunes from Lead Belly to Howlin’ Wolf, from Jimmie Rodgers to Hank Williams, and from Little Richard to Jerry Lee Lewis. Stream-of-consciousness writing yields a tender tribute by insider, analyst, seer, and messenger Greil Marcus as he zigzags into delightful sideshows throughout Morrison’s life; it all works, albeit strangely.  Readers learn much about the “small and gloomy” Morrison (who once told an audience to shut up) and can easily imagine him blending the words of W.B. Yeats (rough god goes riding) into a song.  We can also conjure Morrison pondering other words from Yeats:

“Come away, O human child!
To the waters and the wild, with a faery, hand in hand,
For the world’s more full of weeping than you can understand.”