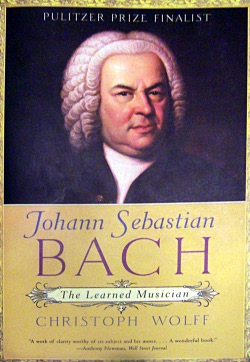 In response to our latest NBCC Reads question on favorite music books, members responded with a clutch of books on classical and jazz.

Richard Horan selected Louis Armstrong's In His Own Words, writing:  “Any sound that came out of that man–be it a sweet song, a high B flat on the cornet, the inspired story of his life–is the sound and expression of pure ecstasy.  Louis Armstrong is the high-water mark of human genius.”

But Beautiful is perhaps my favorite music-related book because of the way Geoff Dyer so playfully mimics his chosen subject, jazz. These vivid stories about jazz legends like Lester Young, Thelonious Monk, and Charles Mingus are mostly made up, but Dyer's book can't exactly be categorized as a work of fiction. Dyer takes real quotes by these musicians and timeless photographs of them, but then improvises the rest, sketching complicated portraits of doomed geniuses and conjuring the incredible music they left behind. As a result, But Beautiful feels extemporaneous, just like the music Dyer so clearly loves. There's no shortage of great books about music, but I find that many fail to engage with the very thing they're describing. An author might have plenty of interesting things to say about some facet of music, but still fall short of evoking the music in the mind of the reader. When I'm reading a book on punk, I expect the prose to be electric. In books about classical music, I'm looking for dynamics and development. Books on country should ladle up generous helpings of rooted, folksy wisdom. But Beautiful is my favorite book on jazz because, in a way, it is jazz.

In classical music, NBCC board member Gregg Barrios recommends Leonard Bernstein's The Joy of Music: “As a kid I received a boxed set of Bernstein's Young People's Concerts for reading and listening. As a young adult I read The Joy of Music. It made a world of difference in my appreication of all genres of music  thanks to Bernstein's imaginative and intelligent presentation.” Lori Walsh selected a children's book: “The great children's author and illustrator Peter Sis explores the life of a prodigy in the delightful and mournful picture book, Play, Mozart, Play!: “Sis explores the child's relationship with his father, but best of all, his relationship with music as companion, guardian, and playmate. So much, in so few words. Play!”

Grace Lichtenstein picked Alex Ross' The Rest Is Noise as “the one book on music from the last several years that I cannot do without. Listening with 'big ears,' Ross brilliantly covers everything from Stravinsky to John Adams, jazz & pop with regard to how music moves forward in time with world events. I am constantly looking up music and musicians in it but it is great reading as well as reference.” While Grace Schulman opted for Whitney Balliett's Collected Works: A History of Jazz, 1954-2001: “Read it for his style alone. His sentences are breathtaking.”

I’d like to nominate Christoph Wolff’s Johann Sebastian Bach: The Learned Musician (2000). The greatest of all composers deserves a special biography, and Wolff, a music professor at Harvard, has written it. The Learned Musician combines exhaustive historical research with a level of musical analysis that satisfies the expert without confounding the armchair listener. Throughout, the author retains a light touch and conveys a sense of awe in the face of Bach’s overwhelming artistic achievement. I actually once had the pleasure of singing under Wolff’s baton: he lectured at Indiana University’s Jacobs School of Music in 2000 for the 250th anniversary of Bach’s death, and conducted a cantata during rehearsal. His conducting was pretty good. His book is outstanding.