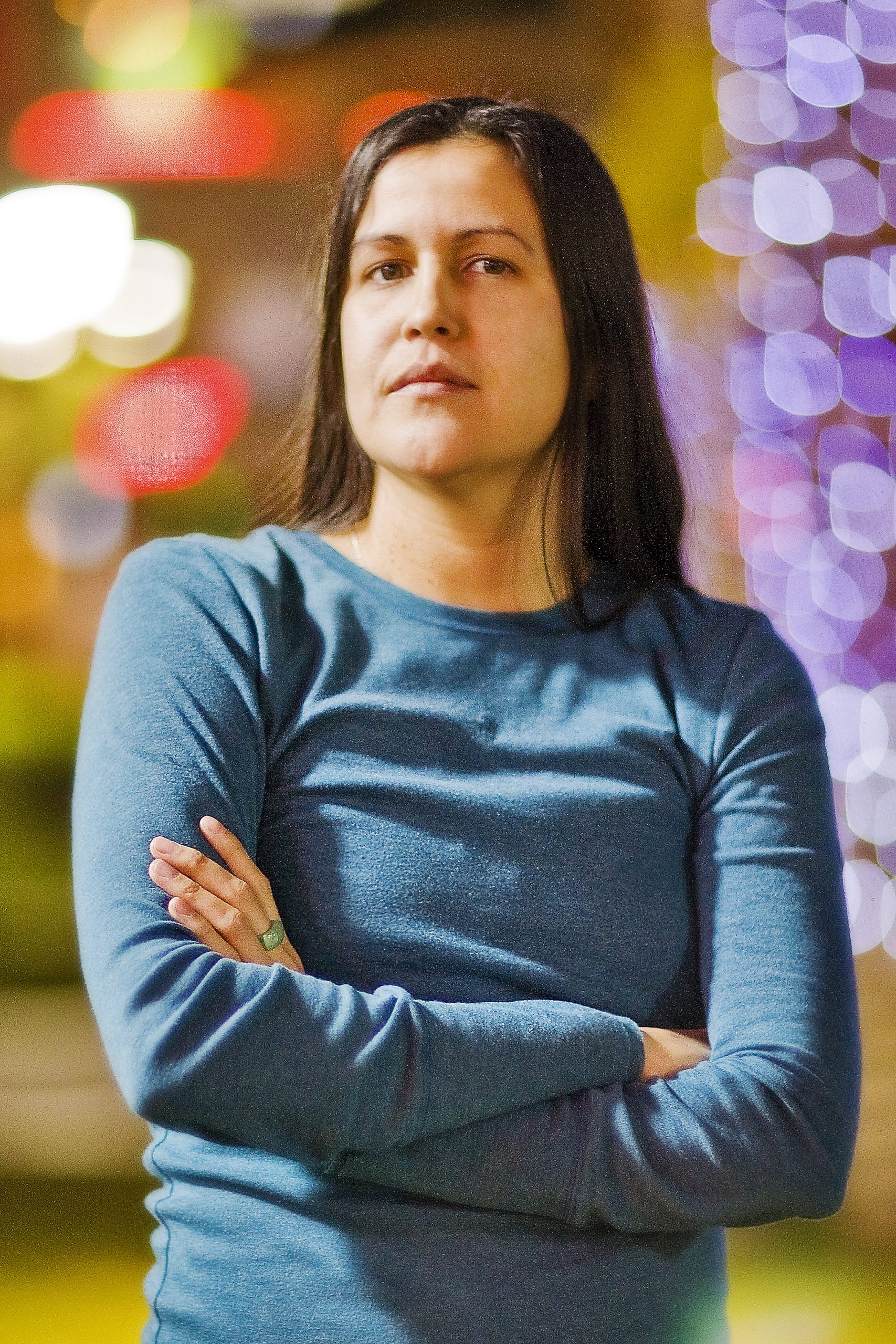 When My Brother Was an Aztec, Copper Canyon Press, 2012.

Natalie Diaz grew up in the Fort Mojave Indian Village in Needles, California, on the banks of the Colorado River. She is Mojave and an enrolled member of the Gila River Indian Community. After playing professional basketball in Europe and Asia for several years, she completed her MFA in poetry and fiction at Old Dominion University. She was awarded the Bread Loaf 2012 Louis Untermeyer Scholarship in Poetry, and also received a 2012 Lannan Residency. She currently lives in Mohave Valley, Arizona, and directs a language revitalization program at Fort Mojave, her home reservation. There she works with the last Elder speakers of the Mojave language.

The story of the speaker’s troubled brother and his uncertain recovery from drug addiction (“–my brother the myrrh-eater–lost fucked-up Magus,/ followed the wrong star–”) punctuates the speaker’s own journey–growing up in a reservation and drawing from various cultural traditions (Greek mythology, Mexican pop culture, Spanish literature, etc.) to articulate the complexities of her identity as a Native American female and to make sense of the chaos taking place in her community. But this sibling tough love is the heart and engine of the collection: Arrested yet again, the brother mocks the situation, “his tongue is flashing around his mouth like a world’s fair Ferris wheel–but he’s no Geronimo, Geronimo would find a way out instead of giving in so easily.” Though you tread political territory in other pages (as in the poem “The Last Mojave Indian Barbie”) the brother’s story is less social issue and more of a family tragedy. How did you want to navigate the reality of drug use in the reservations with the personal narrative of having an addict in the family? How did this shape the story you wanted to tell?

I didn’t plan any specific navigation in regard to writing the poems or giving voice to the experiences of living on a reservation and living with a drug addict. I think these experiences have actually navigated me, steered me in certain directions, hoisted me up the mast to look and to see, pushed me overboard at the Horse Latitudes, smashed me against the shores of my life, even, on some occasions. I think maybe “navigate” is too strong a word in the case of these poems. Navigating implies, to me, a path through, a means of getting from point a to point b. Perhaps, these poems are my questions about which way I should go through this life or my surrender to not knowing how to navigate through some of these experiences other than to move, maybe forward, maybe backward, but move. Because not moving would mean that it has stopped me. The social and the personal are closely bound in the places where I come from. My brother is every brother. My parents’ pain is every parent’s pain. Though I have invited you to sit at our specific dinner table, every house on the reservation has that dinner table. In this book of poems, I want to begin and direct the conversations about what is wrong in my community and in my family, rather than having it pointed out and assessed by those who do not know my people or the places where we have struggled. I have an obligation, maybe, to show you what I have seen, even if it’s ugly, so that people do not make the mistake of thinking some of the ugly is good enough for my community, that we somehow ask for it, or that we don’t deserve better. And I also hope to make it clear that in the midst of the dark, and it can seem dark, we will find light, even if it means sparking our teeth together. My hope is that these poems are not so heavy with despair that readers cannot lift their heads to see the beauty and inevitability of our survival.

The portrait of reservation life is heartbreaking at times, but never quite slips into complete desolation and despair: “The world has tired of tears./ We weep owls now. They live longer./ They know their way in the dark.” This impulse to persevere also reminds me of the poem “Hand-Me-Down Halloween,” in which the mother says, after the speaker has scuffled with another trick-or-treater: “now go git that/ white/ boy’s can-dee/ –iss in the road.” As a poet who writes, among other things, about life on the reservation, what were some of the issues you struggled with as you prepared a first book for publication which would inevitably draw comparisons to the writings by other contemporary Native American poets?

I have never worried about comparisons to other writers, native or non-native. It’s in our natures to compare people, things, experiences—it’s how we make sense of what is new. For example, if you’d never tasted fry bread, I would describe it to you by comparing it to a tortilla, then adding that it was way better tasting, and way worse for your thighs and belly. In this small world of poetry, and in the even smaller world of native writers, I expect readers to compare us to other writers who they use as a touchstone. While we all write under the umbrella group of native writers, we are also very different: different reservations, different regions, different songs and dances, different mourning ceremonies, different dirty jokes, different fry bread even—though, if you want the truth, the best fry bread is at Fort Mojave. I have never been able to see writing as a competition, maybe because basketball took me to the height of competition. It was something I physically fought for, against myself and against other opponents. That was competition. But with writing, I don’t feel competition, not with other native writers, or with any writers for that matter. So far, a native writer has never knocked my book out of my hand or elbowed me in the sternum. At AWP once, someone hip-checked me, but I think it was an accident, since it was in the line to get a drink at one of the fellowship open bars. More worrisome for me than a comparison to other writers was that my parents would read my book and feel betrayed somehow.

I’m particularly intrigued by the presence of the Spanish language and Mexican imagery, such as the Aztec warrior, the novena candles, the El Santo luchador mask, la Virgen, and the mythology in the poem “Tortilla Smoke: A Genesis.” How did the Mojave reservation’s geographical location influence the interaction with Mexican lore, or is this an element that reached out to you through some other point of contact? I was also surprised I didn’t see (as per the recovery work mentioned in your bio) usage of the Mojave language. Any comment about that?

I was raised to hold many truths in my hand, all at the same time, and to never have to drop one in order to have faith the other. This is the beauty of growing up in a multicultural family. Our capacity for identity is large. I am many. Even though most people use the word “myth” to speak of our tribal stories, we see them as truth. So, for me, myth has always been the truest truth. The word “history” on the other hand, we question. Since I first began reading, I was drawn to any stories that were labeled myth—Viking, Roman, Greek, etc.—because I had learned those were the real stories. My grandparents are from the north of Spain, Asturias and Oviedo. We grew up hearing them speak Spanish, and I ended up playing basketball and living in Spain, where I learned to appreciate the language more. Though my grandparents are Spanish, we have many Mexican relatives. My mother is native, from two tribes, but our language was a dying language, and so not spoken at home. It wasn’t until I began to work with my Elders that I began to learn the Mojave language. There are only a few poems in the book that use Mojave, and this is very intentional. The English language silenced Mojave for a very long time, worked hard to crush it completely. I don’t ever want to force my Mojave language to speak in English—what I mean by this is that in my writing, I use Mojave to say Mojave things, things that the English language is too young or not strong enough or deep enough to hold. Truly Mojave things. If I have something to say in English, well, there is plenty of the English language to say it with.

On a side note, my father says that because he is Spanish and my mother is native, all of his kids are Mexicans. He is joking, of course, but in this area, and especially in the area of language revitalization, we have a very strong tie to the word indigenous, which includes many of the peoples indigenous to the Americas. We often work together, on both sides of the border, to help protect and save our heritage languages.

It was very important to me to include the poems in the third and final section of the book, and this is one of the great things about Copper Canyon Press: I didn’t have to make any part of myself invisible in this book. The impulse, as I have experienced it in response to my work, is to separate and divide—either be native or be Spanish, Spanish language shouldn’t be in poems about natives, poems about sexuality clash with poems about the reservation (as if we don’t have sex on the reservation). Maybe this final section was the most important, and I think it begins at the front of the book, with the epigraph: No hay mal que dure cien años, ni cuerpo que lo resista. I’ll translate loosely here: There is nothing bad that can last one-hundred years, and if it does, there is no body that can resist it. For me, this epigraph is the road map for my book. I invited my readers to a place, to my reservation, along my river. Then, I invited them into my house, to sit at our table, to watch us eat (even when it seemed like we might devour one another). Finally, after I’ve shown them where I have been, where I wander out the days, I invite them into my bedroom, crack open my chest for them to get as close as they can—this is the final section. This is where I show how I survive, by making love, by worshipping the body for the way it can be destroyed, for the grief it can hold while still being a bright, beautiful thing. This is where I ask questions beyond the small wars we wage in my home and on my reservation. This is where I question the war of life and answer it with my love of the body, the body that resists, the body that can still find a way to love and touch tenderly after what it has seen. And maybe this is how I manage grief or sorrow, by whispering prayers into whatever body will listen.