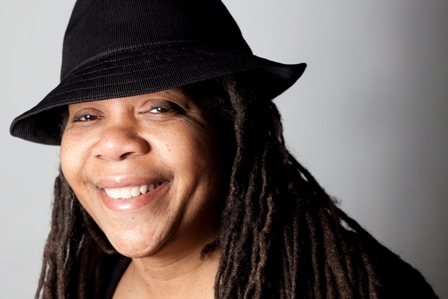 Monica A. Hand is a poet and book artist currently living in The Bronx. Her poems have appeared in Black Renaissance Noir, Drunken Boat, African-American Poetry for the 21st Century, Gathering Ground: A Reader Celebrating Cave Canem’s First Decade, and elsewhere. She earned a combined MFA from The Drew University MFA Program in Poetry and Translation and is founding member of Poets for Ayiti.

Nina Simone died in 2003 at the age of 70, perhaps long before this project was even conceived. Can you speak to how this book of poems evolved? At what point did you commit to the project as a book-length conversation with Nina Simone’s life and work? What drew you to this particular artist as the subject of poetry?

The first Nina poem was written in 2007 during a Caven Canem Regional workshop, led by Kate Rushin. The poem was inspired by a publicity photo of Nina Simone and was an attempt to write about her music.  In the revision process, I did some research online and decided to read her autobiography “Put a Spell on You.” After reading this book, more poems came to me.  In addition to listening to her music, I watched videos of her performing.  The first video I watched was a compilation DVD of her performances from the beginning of her career including an appearance on the Ed Sullivan show, performances in Europe and an amazing live outdoor performance in Harlem. Watching this one video I witnessed her transformation from a reserved somewhat conservation young woman to a bolder more confident performer.

Months later watching this same video with a friend, I realized I was a teenager when I first fell in love with Nina Simone’s music.  I spent my formative years in Newark, New Jersey.  It was a transitional period for African Americans and very significant events occurred: the Newark riots, the assassinations of Martin Luther King and Malcolm X and the advent of the “Black is Beautiful” mantra.  It was at this point I knew I had more than one poem and that these poems would encompass more than one theme.

The speaker (or The Poet, as she’s sometimes referred to in the book) reaches out to Nina Simone’s songs and music for strength, guidance, and sometimes for sisterhood since both moved through difficult periods in life (“Each flat nosed girl is Nina Simone singing from her gut–angry then sad then proud.”). This relationship however also has its challenges: “Sometimes Nina I’m tired of listening to you/ Tired of being so blue tired of these times.” How did you reconcile these life journeys in the book so that Nina Simone’s more familiar narrative didn’t overwhelm the speaker’s private one? How did you select which episodes of Nina Simone’s life to highlight on the page?

I didn’t seek to write a Nina Simone biography. The book as you have stated is in conversation with her music.  I included a few details of her life that I thought were significant to her becoming. I was mostly looking for tone and atmosphere. I wanted to give voice to the emotional context you hear in her music that parallels the life experience of the speaker like regret and pride; and the need to be touched. I also wanted to give the historical and cultural backdrop of when I became acquainted with her music, namely, the Civil Rights Movement and the Black Pride movement (Black Nationalism.)

One of my breakthrough moments in the development of the collection was when I realized how much Nina loved Bach.  This led me to Bach fugues.  So much made sense to me on an intuitive level after that.

The term fugue is often considered a device in poetry. Fugue is usually termed or discussed as counterpoint in poetry and rhetoric. In music, a fugue is a polyphonic composition.  In its essence, “me and Nina” is a musical composition in which one or two themes are repeated or imitated by successively entering voices and contrapuntally developed in a continuous interweaving of its parts.  The fugue is metaphorical. I sought to show the relationship between experiences – hers and mine, how they are both the same and different, new and old.

Another “voice” in the poems is Freedom (Civil Rights Movement, Black Nationalism, self-determination, creativity, breaks with poetic and social conventions)

Unfortunately – too little has changed and sometimes we are sick and tired of being sick and tired.  It is this state that brought about the “Nina, sometimes I’m tired of listening to you” series.  After a while being “soothed” is not enough. Change is the only true antidote.

I didn’t want to balance the narratives of the speaker and Nina Simone I wanted to blur them. I am the happiest when the reader doesn’t know whose story is being told or better yet when the story being told becomes his or her own.

You demonstrate an affinity for form–the bop, zuihitsu, villanelle, epistle, and the playful anagram (though with startling results!), to name a few. Why was this spectrum of forms so attractive and fitting for this book?

Nina Simone was a virtuoso who could not be contained.  She performed gospel, jazz, show tunes, the blues, and popular music.  More significantly she often surprised our expectations often taking one genre of music and flipping it or combining the elements of one or more into another. She was constantly taking the familiar and from that creating something new.  Her music reflects the resourcefulness of the African American people.  We are constantly taking what we have and making it work often creating something better.  It is how we have survived.  Although I don’t claim to be the genius she was, we share this affinity for improvisation and multiplicity.

nina and Me navigates various tones and moods (from the confessional to the political) with such skill that the shifts are simultaneously seamless and surprising. The music and imagery in the language creates such dazzling (and dizzying) moments of tension–some examples: “can’t un-color this world/ colored girl”; “A deep down light in her darkest days we a band of angels/ Come to take her home.” Yet the thread that keeps surfacing so prominently is the mother/daughter, grandmother/grand baby story. There’s so much pain and hurt (“The poem she knows”) and little resolution, only survival (“When Lucille [Clifton] died, I tell my grand daughter/ We are like Lucille trouble in the water can’t kill us.”). The reader is left with an impression of the relationship rather than the details of the story. Is it more important for the reader to respond emotionally to the poem, much like the listener responds to the music? How did you come to terms with the unspoken though certainly not the un-communicated?

Yes, it is more important to me that the reader has an emotional experience like when listening to the music.  The “facts” to any story (and memory) are unreliable, certainly a matter of perspective, and in a way irrelevant. My two favorite lines in the book are “Some truth some lies I’m telling you/Some truth some lies I’m telling you.  As a writer I am constantly trying to get out of my head and into my heart and my gut.  I try to give myself over to my intuitive self that is older, wiser and closer to a universal truth than my socialized self.

After such an investment in this musical and cultural icon, where do you find yourself going next? Can you speak about the project you are working on at the present as you set out promoting nina and Me? Has it been difficult performing both tasks? Have you been able to (or do you want to) move away from Nina Simone?

When I first told my son about the book the first thing he said to me was what are you going to do next.  I couldn’t believe his audacity.  Initially all I could think about was promoting “me and Nina,” and for more than a minute I didn’t have any new poems.  To be honest, it has been difficult to move away from Nina Simone. I still think of the poems that I abandoned and when I hear her music I feel like I have failed to render the glorious complex and achingly sweet experience that is her music.

I do have a new project.  I am still finding my way within these poems.  In the broadest sense they deal with our many selves that have to exist in order for us to survive in this world.  Form wise I am exploring writing schizophrene persona, using mixed and shifting diction, nonlinear narratives and disruptive syntax.  I am using schizophrene here to mean the coexistence of disparate or antagonistic identities.