Each day leading up to the March 8 announcement of the 2011 NBCC award winners, Critical Mass highlights one of the thirty finalists. Today, NBCC board member discusses autobiography finalist Luis J. Rodriguez's “It Calls You Back: An Odyssey through Love, Addiction, Revolutions, and Healing” (Touchstone/ Simon & Schuster). 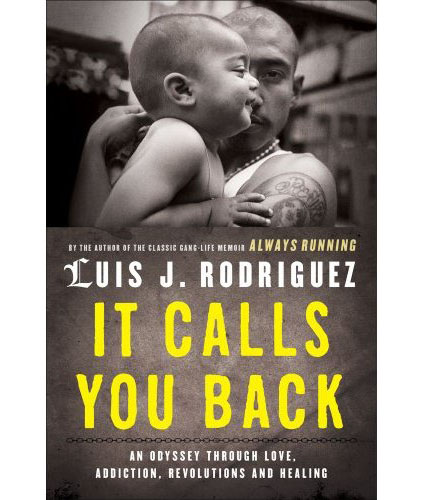 For the popular public speaker Luis J. Rodríguez, there’s no border between being a writer and being an activist. The evidence is in his commitment to projects that bring attention to disenfranchised groups, such as the anthology he edited of poetry written by Chicago’s homeless, or projects that shed light to the complexity of social issues, such as violence in the nation’s barrios. Though he’s also a publisher (and founder of Tia Chucha Press), a poet, novelist and children’s book author, his most notable role has been that of a witness to the devastating experience in an inner-city gang. His bestselling memoir Always Running: La Vida Loca: Gang Days in L.A. became the go-to text that described the downward spiral and hard-won salvation of an errant youth. Indeed the book didn’t offer easy solutions to a problem since the impetus for the narrative was Rodríguez’s efforts to spare his son the same fate. Staying away from preaching or even finger-pointing, the memoir endeared itself to young and old alike because of its searing honesty. It endeared itself to book critics because it privileged story over message.

With the release of It Calls You Back, that wrenching story continues. Rodríguez details the sense of responsibility he felt for the community that had given him a second chance to be a good citizen. His involvement with Chicano activist groups, his literary beginnings in journalism and later poetry, and even his rise to acclaim as a spokesman for the barrio, propelled him into the national spotlight. But this attention came with plenty of compromise, including a series of failed personal relationships. The zigzag between success and failure generated doubts and anxieties that had to be dealt with beneath the shadow of temptation–drugs, a familiar method of escape.

The heartbeat of this second memoir is still Rodríguez’s firstborn, Ramiro, who through a series of unlucky decisions, finds himself serving nearly fourteen years in prison. And It Calls You Back becomes Rodríguez’s reassessment of his professional life, owning up to the possibility that his focus on the community contributed to the neglect of his family, particularly his son. It’s important to note that the book isn’t driven by guilt or accusation, but rather, as in Always Running, Rodríguez simply tells the tale, highlighting moments of both pain and pride.

In many respects, It Calls You Back is a return to the source–family and community–and how one man navigated his duty (and sometimes lost his way) as a father and citizen to discover that, despite his gains, he was no less fallible than his own troubled father. But through Rodríguez’s forthright and sincere narration, it’s difficult not to conclude that the road to clarity, redemption and forgiveness is indeed paved with un conditional love.