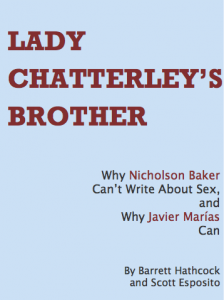 David L. Ulin looks at the poetry of Tomas Transtromer, winner of this year’s Nobel Prize in literature, at the Los Angeles Times.

Scott Esposito, founder of the literary website the Quarterly Conversation (see the Critical Mass Q&A with him), has launched a new series of ebooks dedicated to longform literary criticism. The first entry in the series, to be published October 17, features essays by Esposito and Barrett Hathcock on Nicholson Baker and Javier Marias. Esposito explains more about the project in “Why We Need Long Critical Essays.”

Julia M. Klein reviews two books on the impact of the recession, Don Peck’s Pinched: How the Great Recession Has Narrowed Our Futures and What We Can Do About It and Colby Buzzell’s Lost in America: A Dead-End Journey, for the Columbia Journalism Review.

Rigoberto Gonzalez reviews Justin Torres’ novel We the Animals for the Los Angeles Review of Books.

Maureen Corrigan reviews Laura Lippman’s The Most Dangerous Thing for the Washington Post.

David Haglund looks into what the bankruptcy filing of the Friendly’s restaurant chain means for Nicholson Baker.