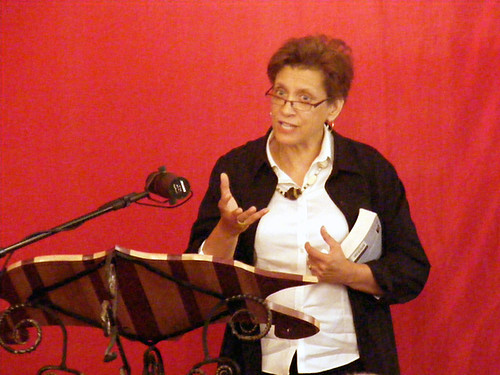 Along with catching up on back issues of The New Yorker and The Nation piled high on my dining table, I’m mostly reading books that inform my perennial, sometimes exhilarating, sometimes throw-up-my-hands frustrating project of alerting everyone to how race and gender determine our world. Who Should Be First: Feminists Speak Out on the 2008 Presidential Election, edited by Beverly Guy-Sheftall and Johnnetta B. Cole, is a smart collection of essays by progressives of all stripes; they remind us how truly historic the election was — but also how it pricked the skin of racism and sexism, the ooze of which is never far from the surface. The evidence that too many feminists still see gender as isolated from race and class causes arms to become airborne.

Historians will tell you that the race/gender divide got its political start when the 15th Amendment allowed black men, but not women of any color, to vote in 1870. But another book I’m reading, Out of the House of Bondage by the historian Thavolia Glymph, reveals deeper complexities. She looks at the relationships between black and white women in slaveholding households. Be prepared for assumptions to be kicked to the curb, as the kids say.

I’m also reading Eugene Robinson’s Disintegration and am surprised, given his prominence as a TV commentator and reporter, that the book isn’t creating more of a buzz. But then his assertion that the “black community” we imagine when we use the term no longer exists is going to take some time to seep through to the pundit class.

What is getting a buzz among many of us in the field is At the Dark End of the Street, by Danielle L. McGuire. McGuire details how protests against the sexual assault of black women in the South were a catalyst for protest organizations that evolved into civil rights groups in the 1950s and 60s. Years before Rosa Parks fatefully sat down in that Montgomery, Alabama bus, she had developed a support network as an anti-rape activist, organizer, and investigator for the NAACP.

The book I carry around with me when I know I will be waiting in line or lunching alone is Zadie Smith’s collection of essays, Changing My Mind. I marvel at her ability to weave in and out of a range of subjects, from Zora Neale Hurston to Katherine Hepburn to her own father’s experiences in World War II — all in a voice at once erudite and playful, observant as an outsider and fully present as a young woman of color in the cosmopolis. O’, those British educations!

By the end of July, I will be ready for the fictional cherries that top my list: Isabel Allende’s Island Beneath the Sea and, at the urging of a friend who wants to discuss all of Haruki Murakami’s novels with me, Norwegian Wood. Can’t wait for the conversations!

Paula J. Giddings is the author of "IDA, A Sword Among Lions: Ida B. Wells and the Campaign Against Lynching," which was a finalist for the NBCC Award for Biography in 2008. She is the Elizabeth A. Woodson professor of Afro-American Studies at Smith College.