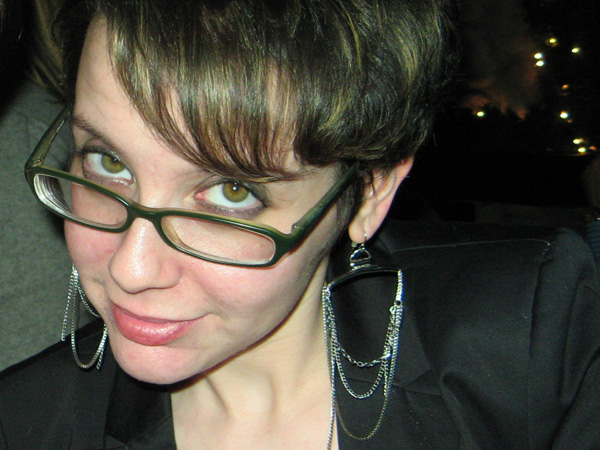 Nicole Steinberg is the editor of the literary anthology Forgotten Borough: Writers Come to Terms with Queens, as well as an editor at large at LIT magazine. Her poetry has appeared in No Tell Motel, BOMB, Gulf Coast, Barrow Street and other publications. She is the author of the forthcoming chapbook Birds of Tokyo and founder and curator of Earshot, a Brooklyn-based reading series. She hails from Queens and currently lives in Philadelphia, where she works at The Pew Center for Arts & Heritage.

In your introduction you write: “People tend to forget about Queens.” And yet, Queens houses some of NYC’s most recognized institutions–the iconic airports LaGuardia and JFK, Shea Stadium (Citi Field as of 2009), the Unisphere, etc., which collectively form only a small part of the borough’s identity. So the statement is directed at outsiders since the anthology is full of evidence that Queens is embedded deep in the heart of its writers, past and present residents. How do you think both insiders and outsiders will benefit from reading Forgotten Borough?

I’d argue that Queens institutions and landmarks don’t necessarily make for a meaningful place in the cultural consciousness. Those institutions get the occasional nod in popular culture, e.g. the World’s Fair observatory towers in Men in Black, or Doug and Carrie Heffernan eating outside the Lemon Ice King of Corona in the opening credits of The King of Queens. But those landmarks are just symbols of the borough; if a person hasn’t experienced Queens beyond taking the 7 train to Citi Field or the AirTrain to JFK, then the symbols have no resonance and are simply placeholders in his/her memory. There’s no background or significance there, no story. And that was my goal from the start: to find compelling stories about Queens—what it means to be from Queens and what it means to settle there, instead of another borough. I think outsiders will be surprised to find how versatile the lifestyles of Queens residents can be, from young people who commute to Manhattan every day to families who never have a reason to leave their neighborhoods. And because there is such a diverse population here, I think insiders stand to learn from reading about these stories as well. Queens is so huge, much bigger than it sometimes seems, and there's a lot of ground to cover, from Astoria all the way out to Douglaston, and everything in between.

Besides being the most ethnically diverse borough in the country (with approximately 50% of its population comprised of immigrants), Queens is also the most linguistically diverse. Yet the anthology is mostly in English. Does this limit the perspective of Queens or how did you negotiate that parameter? Is this why it is multi-genre and multi-ethnic? Or how else did you envision the anthology defining diversity?

I envisioned Forgotten Borough as a literary anthology that reflected the diversity of the borough, yes. Including multiple genres was one essential aspect of that; the contributors were given the freedom to write in whatever format worked best for their individual subjects. I love that the book ended up with a collection of sonnets about the Rockaway Peninsula alongside a historical essay on Queens cemeteries (written by Jill Eisenstadt and Marc Landas, respectively). I also wanted to include contributors who could talk knowledgeably about multiple areas of Queens. A ton of working writers are in places like Long Island City, Astoria, and Jackson Heights, but South and East Queens are equally as interesting—especially so because most New York transplants have never traveled there.

Usually, when people talk or write about Queens, they focus on the ethnic diversity—which makes sense, since the immigrant population is something Queens is known for, often above all else. As a result, I sought to create a collection of work that spoke to the immigrant experience, but also explored other aspects of life in Queens, to distinguish it from what had come before.  The book is an English-language anthology mainly out of necessity, as I'm not fluent in any other languages, but it was always important to me to have multiple ethnicities and backgrounds represented. The contributors handle their subjects beautifully, placing honesty and emotional resonance at the forefront, which is what ultimately elevates the anthology and gives it universal appeal.

The prose and poetry in the anthology covers plenty of territory (in terms of geography, ethnicity, class, race, etc.), and a number of pieces (including your introduction) are brutally honest about the complexity of Queens–its beauty, but also its ugly parts, its spaciousness, but also its congestion, its modernity, but also its valued cultural traditions and history. As the largest of NYC’s boroughs, there seems to be room for everything and for the 2.3 million people who call Queens home. Perhaps that the operative word, home (for those who still live there) and homecoming (for those who will return via the pages of Forgotten Borough). Why was it important to set apart this population from the collective term New Yorker?

In a lot of ways, it's a different world out there in Queens. The people there are definitely New Yorkers, through and through, but living in Queens is a unique experience, due to those outlined reasons and much more. It's a great place to pursue the American dream—to put down roots, raise a family, and work toward success, while benefiting from all that New York City has to offer. Plus, there's a point of pride in living there. Queens natives seem to inherently get that they're the underdogs; in a way, it's a humble place. But I love when someone from Queens hears about the book and expresses true excitement. The borough is often a footnote when it comes to New York City as a whole, so the attention and respect is much deserved and long overdue.

There’s a bit of nostalgia in a few pieces, a longing for the Queens that is no longer there, for what has been lost in this ever-changing landscape. And since this anthology captures a familiar Queens–a Queens of today and the recent past–what would a sequel anthology capture in say thirty or fifty years from now?

I'm willing to bet a future anthology would look quite similar. There's no doubt that Queens will continue to gentrify as people get priced out of other boroughs, but I can't imagine that the face of Queens will become white-washed anytime soon. The borough is a beacon to those seeking opportunity, so if anything, I think the population will become even more diverse as people continue to arrive and make homes for themselves. But just consider how much Queens has changed in the past few decades. All in the Family aired forty years ago and it was set in Astoria, which is now an incredibly diverse and multi-ethnic neighborhood. And though Archie Bunker's version of Queens touched on the cultural integration that was to come, it reflected a completely different world than what we see there now—so it's astonishing to think about how far we've come since that time.

You are a Queens native, and have moved about the borough over the years. But were there some surprises in the material you selected for inclusion in the anthology? Was there something you wished had been represented in the book, which was not to be found in the submissions and solicitations?

A lot of the material addresses themes of isolation and solitude, which was a surprise at first. The idea for the book was borne from my own frustration with outsiders who refused to learn about Queens or even go there, but I hadn't given much thought to the psychological effect that apathy would have on Queens residents. John Weir points out in his piece that Queens is a good place to be alone; I'd never really looked at it that way.

Overall, the book covers a lot of ground while remaining thoughtful and honest. It's not an advertisement for Queens, but rather a sort of ode and rumination, which I appreciate. I wish there had been some more work about Queens as suburbia, because a huge chunk of the borough is exactly that. When you head out to Whitesone, Bayside, Glendale, and beyond, the landscape completely changes, as do the people. Robert Lasner's story, which is set in Fresh Meadows, speaks to this type of suburban setting. But I would have loved to include more of that. I also would have enjoyed seeing some work on some of our more banal landmarks, like the airports or the many, many roadways that wind through Queens: the Long Island Expressway, the Cross Island Parkway, the Van Wyck Expressway, the Grand Central Parkway, etc. They're all easy to ignore, but they're integral parts of the borough, especially if you're someone like me, who spent a lot of time in cars as a kid.

After the experience of putting together and then promoting this kind of project, do you think you might want to pursue another one like it or are you now focusing on your own work? What’s next for you?

I've built a reputation for myself as someone who supports other writers, thanks to projects such as this anthology, a literary magazine, and Earshot, my reading series for emerging poets and authors. So I'd like to take some time for myself and my own work, yes. Right now, I'm working on putting together a full-length poetry manuscript, and then I'll see where the winds of inspiration take me. As for pursuing another anthology, I won't rule out the possibility. It's a huge job but very rewarding, and there's no lack of Queens tales to tell, so a sequel could happen one day. For now, I'm basking in the happy afterglow. It turned out to be a beautiful book that surpassed all of my expectations and it's been a pleasure to share it with others.