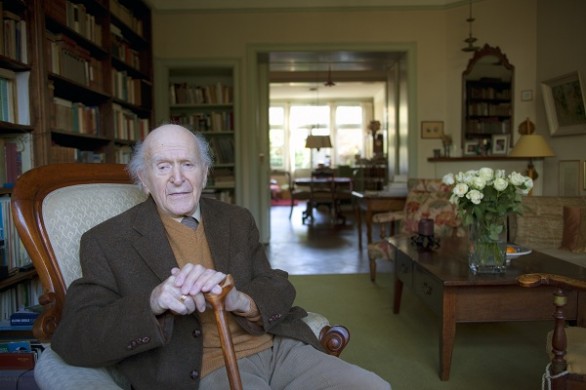 At 101, Hans Keilson became the oldest finalist for an NBCC book award when his novel “Comedy in a Minor Key” was selected last January as one of five titles on the shortlist for fiction. (Carlin Romano's “31 Books in 31 Days” review of the novel here.)

Keilson died on Tuesday in a hospital in Hilversum. He had been living in the Netherlands since 1935, after fleeing Nazi anti-Semitism in his native Germany. Though his parents perished in Auschwitz, Keilson survived the war years in hiding. First published in German, as “Komödie in Moll,” in 1947, “Comedy in a Minor Key” did not appear in English, in an edition by Farrar, Straus & Giroux, translated by Damion Searls, until 2010. It is the spare but lapidary tale of a Dutch couple who agree to hide a Jewish stranger in their house. When he dies of natural causes, they face the challenge of disposing of his body and eluding detection.

Keilson wrote several other books in German as well as a few, under the pseudonym Benjamin Cooper, in Dutch, but for most of his career he was a practicing psychiatrist, particularly drawn to the treatment of traumatized children. When an earlier novel, “The Death of the Adversary,” was reissued last year, Francine Prose, writing in The New York Times, hailed it and “Comedy in a Minor Key” as the work of a “genius.” For those who cherish extraordinary writing, what occurred in a Hilversum hospital on Tuesday was the death not of an adversary but a brilliant benefactor.

Steven G. Kellman was awarded the Nona Balakian Citation for Excellence in Reviewing in 2007. His work has appeared in a wide variety of publications including the Texas Observer, Chronicle of Higher Education, Huffingtonpost.com, Chicago Tribune, Review of Contemporary Fiction, the Believer, Bookforum, and Georgia Review. His books include Redemption: The Life of Henry Roth (Norton, 2005), The Translingual Imagination (Nebraska, 2000), Loving Reading: Erotics of the Text (Archon, 1985), and The Self-Begetting Novel (Columbia, 1980). Kellman is a professor of comparative literature at the University of Texas at San Antonio. He served two previous terms on the NBCC board, from 1996-2002, and is currently Vice President/Membership.