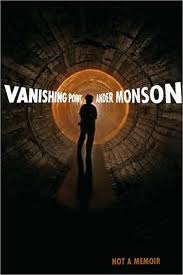 Each day leading up to the March 10 announcement of the 2010 NBCC award winners, Critical Mass highlights one of the thirty-one finalists (to read other entries in the series, click here. Today, NBCC board member Mark Athitakis discusses criticism finalist Ander Monson's Vanishing Point: Not a Memoir (Graywolf Press).

Ander Monson’s second essay collection is subtitled “Not a Memoir,” and, true enough, it’s not. But as the very existence of the subtitle suggests, the book is deeply concerned with memoir, and many of its pages turn the familiar themes of the form inside-out. Like a lot of memoirists, Monson is interested in the way death inspires us to look inside ourselves, but here that means grieving Dungeons & Dragons creator Gary Gygax and recalling his adolescent history with twenty-sided dice. He’s obsessed with his personal history, sure, but Monson’s “shameful paroxysm of self-Googling” turns into an essay not on him but others who share his name. Where other memoirists artfully shape their pasts into careful narratives, Monson fills two pages with nothing but the word “Me.” Where Proust bites into a madeleine, Monson rips open a bag of Doritos.

And still, there’s nothing prankish or unfeelingly ironic about this book. The admirable thing about Vanishing Point––a finalist in NBCC’s Criticism category, not Memoir––is the depth of Monson's interest in discovering what the form tells us about our need to tell stories. In “Voir Dire,” his recollection of a jury-duty stint, he’s alert to how the trial takes the form of a narrative, and to the deceptions inherent in his own writing about it. He’s searching for an “antidote to the pressure I feel of writing nonfiction, of claiming that humans can every actually present the truth, the whole truth, and nothing but, on paper, permanently.”

Truth is so unstable for Monson, in fact, that Vanishing Point is not only not a memoir but not a book as well––or, rather, not just a printed, permanent one. Monson’s website, www.otherelectricities.com, is an essential part of the experience of reading the book: Footnoted words are expanded upon online, to move the book beyond its status as an artifact and to reflect “flux, motion, synapses connecting and reconnecting and thinking exploding everywhere.” Even so, the old-fashioned text explodes in its own way. In “Exteriority” he pushes the text to the very edge of the page, removing the margins to show just how much they frame stories on paper. “Solipsism”––the essay that opens with those two pages of “Me”s––sprays out into sidebars, footnotes, and marginal digressions, the better to expose the performative act of writing.

Monson’s most effective experiment, though, deals with the texts of memoirs themselves. In a series of “Assembloirs,” he stitches together passages from dozens of examples, from Michael J. Fox to Joan Didion to Graham Greene. Putting these lines under the harsh glare of critical scrutiny reveals them as the artful constructs that they are, designed to convince, cajole, damn, or earn your sympathies. In the process he shows how “our stories about our own lives are a form of fiction.”

Monson is not a pioneer in crafting collages of this sort––he’s part of a lineage that runs from William S. Burroughs to David Markson to Jonathan Lethem to David Shields, whose provocative 2010 manifesto, Reality Hunger, navigated similar territory. (The competition seems friendly; Shields approvingly reviewed Vanishing Point in the New York Times.) Yet Monson’s enthusiasm never feels shopworn or gimmicky. Like many critics of memoir, he sometimes wishes writers would show some silence, discretion, restraint. But more precisely, he mainly wishes that writers more freely admit the constructions of self that are involved in so much of what they put on the page, however much they choose to deny it. The pleasure of the memoir isn’t in how well-machined it is but in what he calls “the pockmarked surface of the I: that’s where all the good stuff is.”