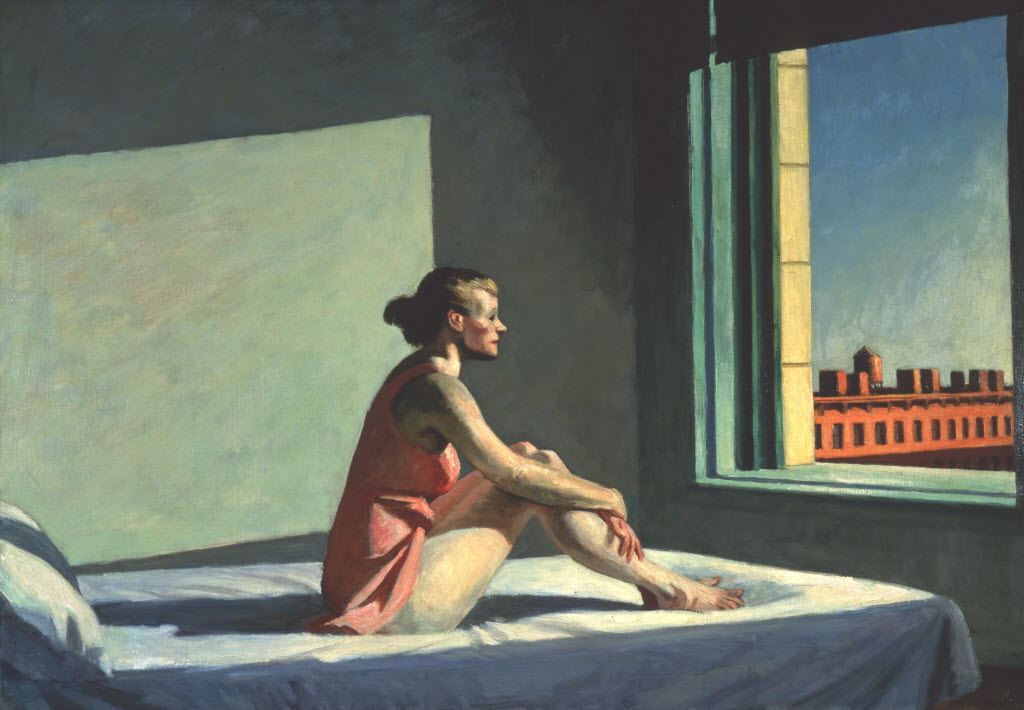 The arrested moments on Hopper's canvases invite speculation. To invoke the persona of the artist, to imagine autobiographies for the men and women depicted, or to emphasize qualities of light, horizontal architecture, and the filmic sensibility underlying his compositions could be expected approaches to a tribute. While Farrés does present the artist as a figure whose emotions and state of mind inform many of the scenes, and does remark on themes such as the “urban dream” (“East River, c. 1920-1923”) where the “metropolis rages” (“New York Movie, 1939”) as well as alienation, he also diverges from the expected when he combines the larger narrative about Hopper with personal touches that reveal his Spanish-language influences and his own contemporary circumstances. Rather than strictly paying homage, the poems become warmer reflections of what the artist's work has meant to the poet.

Whether in the seeming anachronism of a T-shirt printed with Van Gogh's sunflowers in “Manhattan Bridge Loop, 1928,” or in references to “Borges the fantasist” and Pere Serafí, a Catalan poet, Farrés draws from sources beyond the subjects represented in these paintings. The translator Lawrence Venuti's notes on “Railroad Sunset, 1929” further convey the carefully considered layers the writer has added to his work. Of the choice hopper, Venuti explains, “Farrés chose the word 'tremuja,' the Catalan term for the farming device known as a 'hopper,' because in English, it resembles the painter's surname.” Such glimmerings imbue the collection with a vibrancy that demonstrates the possibilities of the ekphrastic, and the importance of moving beyond the transcriptive and towards the transformative. These poems are not literal, narrative descriptions of what already appears on the canvas — a frequent problem with poems inspired by art, that do not search for meaning beyond a surface admiration, and do not clarify what is at stake in the writer's interpretation. Farres writes much subtler evocations; he allows himself the freedom to introduce new subtexts and to create a hybrid character.

The collection opens with “Self-Portrait, 1925-1930,” a poem in which the speaker has been inhabited — “Make no bones about it: / Hopper and I form one single person.” The speaker changes from a city-dwelling voyeur who sometimes speaks in the language of cinema to “The spitting image / of everyman, discreet, a-face-in-the-crowd” (“The City, 1927”). He's also a recluse “who hardly gets out for he has nobody to get out with, / or no pals sufficient to his liking” (“The Circle Theatre, 1936”), someone whose lexicon comfortably comprises colloquialisms as well as references to Goethe, Kafka, and Greek mythology. The result is an eclectic, modulated voice that reveals the artist and the poet, two personas who are fused and who reappear in many of the poems. In “Stairway, 1949” we find the ars poetica of this new poetic character:

We are reminded that patience is required to produce, regardless of the medium. These “profound thoughts” do not arrive as lightning. They must be scraped with an effort that recalls Hopper's own response when asked about the origins of his paintings: “It's very hard to define how they come about but it's a long process of gestation, in the mind and a rising emotion…” The poet's sensibility, that “scrapes together” words, is like that of the artist, who is bound by vagaries of weather and light, and who must similarly wait for ideas to come. The state of waiting, Farrés seems to suggest, is more than either gift or hindrance. It is an essential period. While a poem may look effortless and straightforward, it is often a practiced fluidity that has shaped it; the work only seems “transparent.” Time also plays a role in crafting these pared-down poems.

Farrés often refrains from using extensive metaphors, which is entirely fitting for these bold and often simplified scenes of everyday life. Visual elements are presented as they are, with little to no adornment: “The blue / of columbine and the blue of jacaranda” (“Small Town Station, 1918-1920”). A pleasingly hypnotic list — “…buildings, hydrocarbons, aromatic mint teas, / textile factories, tanneries, and a river” (“East River, c. 1920-193”) — names the industrial alongside the out-of-place “teas.” There is less need for the leap that metaphors provide, as the juxtapositions between large and small, the static (buildings) and flowing (rivers), create interest in their own way. On rare occasions, Farrés's directness of speech and plainspoken style leave little room for a reader to draw his or her own inferences about a detail's significance, as when he explains what bareness represents in the following lines: “The bareness of this space, cut straight / down by the light that comes delineated / from outside, is the bareness of life” (“Sun in an Empty Room, 1963”).

The overriding sensation one gains of Farrés from reading Edward Hopper is that of a writer who honors poetry that speaks of natural mysteries and great forces, as well as of commonplace, domestic intimacies; poetry that conveys thought in a lucid manner. Everything is at least worthy of observation, if not celebration. The best of these works uncover the delicate interstices between viewer and subject, artist and writer; they show us “the possibility of other worlds / or an extraordinary order of things” (“Railroad Train, 1908”).