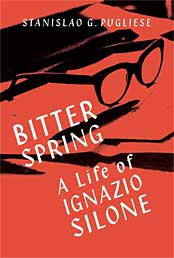 In a literary world where only one Italian intellectual gets to be world-famous at a time, Ignazio Silone (1900-78) enjoyed that perch in the middle years of the 20th century. Although the literature Nobels in his lifetime went to Deledda, Pirandello, Quasimodo and Montale, Silone's complex profile—novelist, activist, editor, political theorist, former communist turned gently anti-communist tribune of socialism—made him an authoritative and admired figure. Praised by the likes of William Faulkner, Thomas Mann and Bertrand Russell, he died with the aura of “classic author” about him, his 1930s novels Fontamara and Bread and Wine translated everywhere.

With the notable exception of Primo Levi, whose well-earned American apotheosis led to multiple biographies in English, modern Italian novelists and intellectuals rarely find an American biographer, let alone one with the grasp of Italian intellectual culture possessed by the fine Hofstra historian Stanislao Pugliese. His Bitter Spring is a gift, the first thorough study of Silone in English. Anyone especially interested in Italian literature or mid-century European intellectual history should be even more grateful, for Pugliese does the best job yet of explaining a man who seemed inexplicable even to his Irish wife of three decades, Darina Laracy.

Having lost both his parents and 5 of 6 siblings by the age of 14, the writer born Secondino Tranquilli in Pescina dei Marsi, Italy—an Abruzzo town devastated by a 1915 earthquake that killed his mother and some 70 percent of its  populace—grew up with a profound sense of life's injustice and a forceful determination to fight it. A co-founder of Italy's Communist Party at 21, he became a commited opponent of Mussolini at home.

One of the many aliases he took on as a roaming Italian Communist activist—”Ignazio Silone,” which he chose while languishing in a Spanish jail in 1923—would later become his nom de plume. A 1927 visit to Moscow , during which he quickly intuited the advancing authoritarianism of Stalin as the latter turned on Trotsky, spurred Silone's questioning of doctrinaire communism. By 1931, clinically depressed and expelled from the Italian Communist Party because of his independent stands, Silone turned to expressing his anti-fascism in committed, realist fiction written during exile in Switzerland. Skeptical, savvy, cosmopolitan, yet ever drawn to the humble  Catholicism exemplified by St. Francis and the spiritual, ascetic Celestines, Silone, with Fontamara and Bread and Wine, captured the fight for justice of Abruzzese peasants armed with Catholic folk wisdom, trickle-down Marxism, and little else.

After World War II, Silone became Italy's leading liberal intellectual, co-editing the prestigious journal Tempo Presente from 1956 until 1968 when he learned, to his dismay, of its covert funding from the CIA. He resigned and thereafter devoted himself wholly to writing. After his death, in 1996, another controversy broke out about Silone's loyalties when Italian historian Dario Biocca found letters suggesting that Silone may have been a minor informer for the Fascist Party during his 20s. The issue remains cloudy. The whole of Silone's life better indicates that whatever favors he may have traded with a Fascist policeman for specific purposes, and whether he was a double agent or a triple agent, he was never, ideologically, a Fascist sympathizer. A fairer assessment was the one delivered by Italy's president upon Silone's death in 1978: Pescina's cultural warrior as the “noble, rigorous, inflexible, democratic conscience of contemporary Italian culture.”

Pugliese untangles and evaluates the still mysterious threads of Silone's secretive life and undercover affiliations better than anyone so far. More important, he brings back to life a writer whose reputation has unfairly receded. Like Camus, who once remarked to Simone Weil's mother that Silone deserved the Nobel Prize more than he did, Silone tolerated no acolytes or disciples, and resisted invitations to power. (He declined the posts of Italian ambassador to France and head of Italian state broadcasting.) Silone never developed literary worshippers who might have kept his flame alive. Bitter Spring eloquently unpacks why so many distinguished figures of art and culture saw kindred greatness in the man who flintily described himself as “a Socialist without a Party, a Christian without a Church.”

Click here to read an excerpt from Bitter Spring.

The NBCC awards ceremony is free and open to the public, as are the readings by NBCC finalists on Wednesday, March 10. To purchase tickets to the reception following the awards ceremony, click here.