This is the fifth installment in the series “What Bolaño Read,” by former Shaman Drum Bookstore manager Tom McCartan. The series , which details the reading habits of the author of  2666, winner of this year's NBCC award in fiction, celebrates the publication of  Roberto Bolaño: The Last Interview & Other Conversations, with an introduction by former NBCC board member Marcela Valdes, which is just out from Melville House. 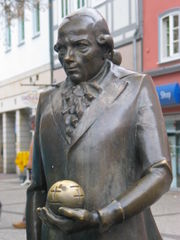 Roberto Bolaño was an avid reader of philosophy. And he was especially drawn to the aphorism — clipped, profound, and, at times, terse thoughts, and a literary form engaged by many of the world's greatest writers, including Blake, Kafka, Schlegel, Tolstoy, and Wittgenstein, among many, many others.

Bolaño's By Night in Chile, the character Captain Jünger shares aphorisms; 2666 is, in the words of Financial Times reviewer Henry Hitchings, “studded with aphorisms.” Bolaño also named, in his last interview, the aphorisms of Georg Christoph Lichtenberg in a short list of books that significantly marked his life.

Lichtenberg was born in Darmstadt, Germany in 1742. He was a pastor's son and the youngest of seventeen children. He eventually made his way to Göttingen where he entered University. He suffered from chronic health issues for most of his life, including crippling back problems. Upon graduating from Göttingen he was hired on as a physics professor, a job he kept until his death in 1799.

In an essay in Entre paréntesis, Bolaño explains his admiration of Lichtenberg by saying his aphorisms “behave with humor and curiosity, the two most important elements of intelligence.” Bolaño goes on to say that Lichtenberg's work “prefigured Kafka and the better part of twentieth century literature.” Among them:

Lichtenberg was primarily a scientist and perhaps most famous among his peers for work with electricity and certain types of fractals now dubbed “Lichtenberg figures.” His empirical nature was also a source for much of his satire.

There is, in general, a lot of humor in his aphorisms, and Bolaño even referred to his work as a “masterpiece of black comedy.” A few examples:

“A person reveals his character by nothing so clearly as the joke he resents.”

“If all mankind were suddenly to practice honesty, many thousands of people would be sure to starve.”

“A book is a mirror: if an ass peers into it, you can`t expect an apostle to look out.”

A collection of Lichtenberg's aphorisms is available in an English translation by R.J. Hollingdale as The Waste Books.

Tom McCartan is the former manager of Shaman Drum Books.