Over the next two weeks, we’ll be hosting “What Bolaño Read,” a series of posts by Tom McCartan charting the reading habits of Roberto Bolaño, the Chilean novelist, poet, and short story writer who won the National Book Critics Circle Award for fiction for 2666 this year. Bolaño was a prolific writer, the author of numerous books, including 2666, The Savage Detectives, and By Night in Chile, but he was also a dedicated reader–and his diverse reading influenced his work in many ways. The series celebrates the publication of Roberto Bolaño: The Last Interview & Other Conversations, which is just out from Melville House, with an introduction by recent NBCC board member Marcela Vales.

Roberto Bolaño read almost everything. Understanding his dedication to reading is fundamental to understanding him as an author and, more importantly, as a person. 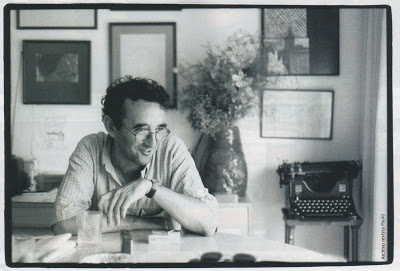 When Mónica Maristain interviewed him in 2003 for Mexican Playboy (what would be his last interview) she asked him to name five books that marked his life:

“In reality the five books are more like 5,000. I’ll mention these only as the tip of the spear: Don Quixote by Cervantes, Moby Dick by Melville. The complete works of Borges, Hopscotch by Cortázar, A Confederacy of Dunces by Toole. I should also cite Nadja by Breton, the letters of Jacques Vaché. Anything Ubu by Jarry, Life: A User’s Manual by Perec. The Castle and The Trial by Kafka. Aphorisms by Lichtenberg. The Tractatus by Wittgenstein. The Invention of Morel by Bioy Casares. The Satyricon by Petronius. The History of Rome by Tito Livio. Pensées by Pascal.”

A behemoth list of wonderfulness spanning centuries and continents.

In a 2002 interview for Bomb magazine Carmen Boullosa asked him to list his literary genealogy. Note his use of the word “obvious.”

“As to my idea of a canon, I don’t know, it’s like everyone else’s — I’m almost embarrassed to tell you, it’s so obvious: Francisco de Aldana, Jorge Manrique, Cervantes, the chroniclers of the Indies, Sor Juana Inés de la Cruz, Fray Servando Teresa de Mier, Pedro Henríquez Ureña, Rubén Darío, Alfonso Reyes, Borges, just to name a few and without going beyond the realm of the Spanish language.”

Over the next two weeks, we’ll be plunging into these lists, trying to understand what Bolaño found in these writers and how they influenced his work.