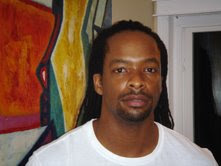 Jericho Brown worked as the speechwriter for the Mayor of New Orleans before receiving a Ph.D from the University of Houston. His poems have appeared in Callaloo, The Iowa Review, jubilat, and New England Review. The recipient of a Cave Canem Fellowship, two scholarships to the Bread Loaf Writer’s Conference, and two travel fellowships to the Krakow Poetry Seminar in Poland, Brown is currently an Assistant Professor at the University of San Diego.

This book works with a number of organizing principles and extended metaphors: eight poems numbered as “tracks” dispersed throughout and the function keys of an iPod (or other music-reading contraption) name the three sections of the collection; each of Dorothy’s three traveling companions (the Scarecrow, the Tin Man, and the Lion) claims a space in each of those three aforementioned sections; and then there are those single-word titles that dominate the table of contents, the names of men (Robert, Sean, Rick and so forth) echoing the single-word function keys. Structurally there’s plenty to consider, more than in most poetry collections. Thankfully these considerations don’t overwhelm the individual poems. Did you struggle with how much you were asking readers to think about how these layers of metaphor worked independently and together? How did this book come together for you and were there any “happy accidents” or flashes of inspiration during the process?

The artist’s answer to any question is always, “Risk.” My only goal is to write poems that take risks in their form and their content. I have always been attracted to work that manages to say what may be thought unsayable, poems that make clear the vulnerability of the poet to his or her work. In contrast, I am not interested in poems that fears what I think of as a necessary mixture of the sacred and the profane. My dedication to risk allows me to write work that, I hope, fuses an imitation of modernist fragments with fairy tale, fable, and sermon.

As I began to determine an order for Please, I saw and seized an opportunity to exploit the fact that much of the material is rooted in history and culture—an opportunity to make use of the only medium that may rival the love poem, and that is the love song. All writers involve themselves with finding the appropriate metaphors for composition and revision. For me, music became the model for the poem and for Please itself. I wanted to know how some of my own favorite bands and singers characterized their various subjects. What about their voices mirrored the abstractions about which they so often sang?

I must add that where I grew up, these R&B and pop singers had a kind of superhuman status. As a child, it was fine if I heard gossip about a murder that occurred two blocks away, but the fact that Marvin Gaye’s father had shot him was only discussed if adults thought I could not hear. In Please, I use these figures and their music for the kind of myth-making with which poets always find themselves obsessed.

I am neither afraid of nor married to difficulty or accessibility. Anita Baker, for instance, gained popularity in the 1980s because of her voice and the feeling it could reflect. Here and there, the lyrics are powerful, but most of her listeners admit to having no idea what her lyrics are. Similarly, I mean to write poems that are felt before they are understood. Of course, anyone who reads or hears my work can tell that I have an investment in story and folklore, particularly as we understand it in the African American literary tradition, but no matter how obvious the narrative, I’ve never thought that knowing exactly what’s going on in a poem is what attracts us to it. Please is an example of the aesthetic decision I made for writing voice-driven poems that engage the private self while also confronting issues of race, gender, class, and sexuality. The best singers showcase their talents by performing several kinds of songs for an album or during a show. What unifies the show, the album, and hopefully, my book, is the voice.

Back to the three sections (Repeat, Pause and Power), which are words that like the title, Please, are multi-faceted, their definitions, usages and meanings change according to the context. The same could be said about people, about relationships, which is why the explorations of sexuality and masculinity are so rich here: you are writing as a gay man about the difficult stages of manhood—growing up, expressing love, sex. Those lines in the opening poem, “You can’t tell/ The difference between a leather belt and a lover’s/ Tongue,” set the complex tone of those explorations. And then there are those moments that are uniquely gay like coming out. How do you negotiate the personal with the universal? How do you maintain the intimacy of an experience (like in the poem “Family Portrait”) as it opens up into a larger declaration about a shared experience?

When I write and revise, I imagine myself in the middle of a conversation, often a disagreement, with someone I love. I mean for the experience of writing to be like the experience of saying, “I love you” or “I’m sorry” or “Baby, please don’t” to a person I need in my life. The only difference is that, because those phrases are so trite, I have to find the language and pacing necessary to let that someone know I really mean it.

I negotiate the personal and the universal by understanding that the universal, as it has been presented to us over and over again, is a lie. I know it’s a lie because, though I’ve witnessed audience members at readings ask gay poets what a straight person can appreciate about their poems, I have never seen a straight poet asked what gay people can appreciate about his or her poems.

I am, by the way, about sick of hearing people say that they don’t see someone’s race. Why not see it? I think this is part of what Langston Hughes’ essay “The Negro Artist and the Racial Mountain” critiques. Lately, very well-meaning liberals (black, white, Latino, and other) tell me that when they see the man for whom they voted in the recent election, they don’t see a black man. Instead, they say they see an intelligent man or a family man. First of all, this is a lie; everyone who sees him sees that he’s black. Secondly, the statement suggests that, in their minds, one cannot be intelligent or love one’s family and be black at the same time. Finally—and this is what bothers me most of all—the comment seeks to erase one of the things that may be a virtue to him given the great task he must do. Fortune 500 companies figured out that employee diversity made for better products and bigger profits. Why, then, wouldn’t we want to vote for someone because, along with being an intelligent family man, he is black, and therefore, may offer a perspective that has yet to exist in the office he will hold? The civil rights movement was not meant to erase race. As a matter of fact, one of its goals was to make the history and contributions of various peoples in this nation all the more prominent.

I wonder what would happen if we stopped telling the lie of universality to our poetry students…if we, instead, told them the truth of difference, of the magic found in range and in oddity, in writing that which is, dare I say it, queer. Yes, syntactical acumen just might be universal, but content is definitely not. Content has nothing to do with anything we love. If it did, we’d all have better boyfriends.

The Cave Canem legacy continues to be a strong presence in American letters. This year, Cave Canem faculty Patricia Smith became a finalist for the National Book Award, Douglas Kearney won both the National Poetry Series and a Whiting Writers Award, and then some notable debuts: besides yours, I have been greatly impressed by Sean Hill’s Blood Ties & Liquor. Can you speak to the importance of this distinguished community in terms of your identity as an African American poet? Are there any expectations, perhaps self-imposed, that come from knowing you are part of this group of poets?

Cave Canem is most important as a space in which black poets are told by black poets two very true things simultaneously: that they can write about race and that they don’t have to write about race. Black writing is hardly ever so safely nurtured in MFA programs because white workshop instructors and students think they know exactly what black poets ought to be writing. Natasha Trethewey, the inaugural Cave Canem Book Prize winner and a Pulitzer Prize winner, was once told by one of her instructors to stop writing about being biracial and to take up Ireland as her subject. Roger Reeves, a very talented Cave Canem poet who recently won the Ruth Lily Fellowship from the Poetry Foundation, has gotten solicited and then rejected by journals who pointedly asked that next time he send material that focuses on race and the African American experience.

Because of the exposure afforded to me by Cave Canem, I am of the impression that my own writing must be as diverse and as ambitious as the writing of the poets who teach and attend its workshops. The best writers don’t have anything in particular in mind when they write. Each of them has, instead, a love of language coupled with a real exploration of one’s own obsessions. They think about things like being black without thinking they should or should not be thinking such a thing. Only Cave Canem allows this state of being for black people who want to write.

My experience as a Cave Canem fellow led me to believe that, through Please and its choir of voices, I could make lyric revelations about the often contradictory life of the minority artist and his or her relationship to consumers—an audience that may know nothing firsthand of the background that inspires that artist’s material.

A great achievement of countless black American poets has been making plain what the world they desire is like and allowing readers to contrast that world to the dangers of the one in which we actually live. I’ve always thought of writing as participating in a conversation, the method by which I am able to respond to the many questions I think Gwendolyn Bennett and Gwendolyn Brooks and others ask me when I read their work. Putting poems in print gives me the chance to ask them—and hopefully a few of the unborn—questions that I have too. I won’t live long enough to know whether or not anyone in the far future I’m attempting to address will bother with responding to the questions that Please asks. And it’s just as well. Otherwise, I may not care to write another book.