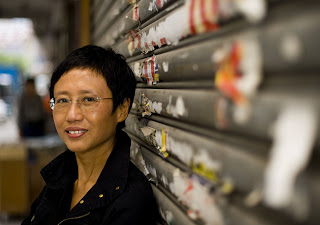 Xu Xi is one of Hong Kong’s leading English language writers. She is the author of seven books of fiction and essays, including Overleaf Hong Kong: Stories and Essays of the Chinese, Overseas and the novel The Unwalled City. Recent awards include the inaugural Man Asian Literary Award shortlist and the O. Henry Prize. She inhabits the flight path between New York, Hong Kong and the South Island of New Zealand.

In your introductory remarks to this collection, you write: “I am a writer of fiction, and it became my challenge to find my creative voice in non-fiction to articulate the intersection of memory and moment as it worried the imagination.” What sort of discoveries did you make in this process of shifting from one genre to the other and in what ways did your experience as a writer of fiction prepare you for the task of cultivating and shaping memory into art?

The most intriguing discovery I made with respect to my writing is that it proved easier for me to draft new fiction than creative nonfiction, but that the revision process for fiction is much harder than for creative nonfiction. When I finally could draft an essay (which was a slow and often difficult process), revision followed quickly, and it was usually easy to complete the piece. But for a short story (which would be comparable in scope and length to an essay), it was much harder to revise and finish it, even though the first draft was much easier to write. As a fiction writer, I was always wary of crative nonfiction, afraid of the very idea of memoir, because part of the point of fiction was to allow imagination, rather than the way things actually happened, to unlock whatever truth worried the writing of a particular piece of fiction. Yet it became clear to me, the more fiction I wrote (especially what I wrote about Hong Kong), that they were subjects—personal, as well as political, social or cultural—that simply did not find voice in fiction. That was why I did turn to creative nonfiction. Fiction prepared me as a cnf writer in terms of locating moments in memory and experience that lend themselves to a scene; also, the idea of the first person as character and not author showed me ways to give voice to memories, ideas and facts e.g.: Hong Kong’s history by channeling the city’s voice as a first person plural narrator, or creating a pen name for a fictional op-ed writer who observes changes in the city (Loong Hei). What writing cnf did however was to free me from the “show don’t tell” constraint that fiction writers can’t help but hear as they write, because the essay form allows more opportunity for exposition. But the notions of drama, conflict, epiphany, a protagonist’s journey—all the craft issues that come from fiction—these made for great preparation to write personal essays.

You give a number of “guided tours” to the readers through Hong Kong’s lesser known streets (to outsiders anyway) and through streets that have changed since you left, through the days of your Hong Kong youth and through the experiences of your recent visits, and through the complex history of this city, which has thrived even as it has “changed hands” repeatedly. You state: “This is a city of random reality. Your Hong Kong is not my Hong Kong, we seem to say to each other in this small space we share with such civility. Why is it possible for us to be so separate even as we bump elbows everywhere we turn?” Like any dynamic city, Hong Kong is constantly transforming and redefining itself—inhabitants die or move on, new ones are born or move in. Is this why literature and art are important—to preserve those fleeting stages of a city’s timeline? How did you achieve orientation through the writing? What doesn’t change in Hong Kong that allows the comfort of stability?

Contemporary literature and art allow “snapshots” of a place in time and Hong Kong’s rapid transformation of the last forty to fifty years is startling to confront when you flip through old photographs. A pop reference that disappears ten years hence, if unpacked and investigated (like William Hung) can and does show you what informed the transformation of the city. One reason I used streets is because street names don’t generally change, and even if they do, you can find the former name on old maps. There is a history to the naming of streets, and in Hong Kong’s case, the names invoke our British colonial past as it collides with the handover to a new Chinese reality. I also name districts and public housing estates (many of which are like mini towns within the city), because in as small and overpopulated a city as Hong Kong is, it is often startling how rooted people are within their own locales of home and work. You’re right in saying that the streets I named are “lesser known”—obviously so to an outsider but also to locals who might never have once stepped on some of these streets if they are not from that area. What doesn’t change, however, is that no matter how much land we reclaim from the sea, or new districts we develop, the city is not physically large. You can traverse the entire city area (including the major outlying islands) by public transport in a day. It’s the smallness, and convenience that provide a kind of comfort—no matter where you are, “there” is not ever that far away. It allows for an intimacy of human relations that is unlike other cities I know, e.g.: New York, because if you say “let’s do lunch” or “let’s have tea” it really is possible to do (despite everyone’s busy schedules and lives—many like mine split between Hong Kong and elsewhere), because somehow, the proximity of every place makes it more do-able. So yes, you can really “keep in touch” and not just by SMS or email.

Western culture—its music, its films, and the ever present dream to “go to America”—is a noticeable texture in your book. Americans are part of the Hong Kong landscape, even as tensions exist between the different populations (white and Asian). Is this how an international city constructs identity and desire for young people, the influx of “things American”? How is Western culture more present in Hong Kong today (or is it?) and what does it feel like to return now that you are a part-time resident of the U.S.?

The omnipresence of American culture world-wide is inescapable, even as it is digested and reconfigured in any myriad number of ways. That’s true in Hong Kong as well. Whether it’s films or music or fashion or fast food, all of it jumbles into a kind of globalized way of being that any contemporary Hong Kong young person exhibits. I do think international cities construct identity and desire by a seemingly random selection of what’s out there, much of which is American. Of course, it’s not entirely random, especially when you think about American entertainment and sports cultures for example, because e.g.: Disney can afford to export what it creates with ease, just as the NBA can, whereas an independent filmmaker who is doing really innovative animation might make it on the Hong Kong festival circuit if she or he is lucky enough. Likewise with fashion and the brands that are big and successful will be replicated worldwide (it’s all about economies of scale), so you’ll see e.g.: Club Monaco in New York’s Soho as well as in Festival Walk mall in Hong Kong, but Lucky Wang, a high-end children’s clothing brand is a store in New York’s Chelsea district but not in Hong Kong (despite its very Chinese name). Western culture has actually increased in Hong Kong because it is now such a given, as opposed to e.g.: the late 1970s when the first MacDonald’s opened there.  The idea of American style pizza is no longer foreign or unaffordable; by the same token, cuisines that were once completely unrepresented now proliferate (Italian and Middle Eastern restaurants are extremely popular these days). But other Asian cultures have also left a mark: when MacDonald’s first appeared was around the same time when the first Vietnamese restaurants were opening up in Hong Kong (today there’s a Vietnamese restaurant in every mall and district of the city). Japanese culture has probably made the most significant impact, especially in entertainment and pop culture, probably because Japan was one of the earliest Asian countries to rise to a first world economy. And everyone travels—certainly around Asia but also to Europe and America and elsewhere—whether you’re a local school teacher or international banker or hairdresser or multinational corporate executive. These days when I go back to the city, I find it both more Chinese and more international.  It’s still a little jarring to be spoken to in Putonghua (Mandarin) instead of Cantonese by other Chinese you meet because we have so many residents and visitors from the Chinese Mainland now (as well as Singapore or Taiwan where Mandarin is the common dialect), not to mention the many Americans or Canadians who also speak Putonghua. Likewise, the fact that American expatriates (approximately 50,000) outnumber the British as residents still feels a little odd, as is the fact that the largest minority group is Filipino, because of their presence as domestic helpers in the city. These changes have occurred in the last 10 to 15 years, and does make Hong Kong feel very 21st century—multicultural, Chinese, international, connected to the world. Anything I can get in New York City I can pretty much get in Hong Kong (and that includes the arts and entertainment—jazz, opera, Cirque du Soleil). As well, there’s now a huge mosque in my old neighborhood, which is right in the heart of the city by the harbor in Kowloon.  Crossroads of the world, for sure.