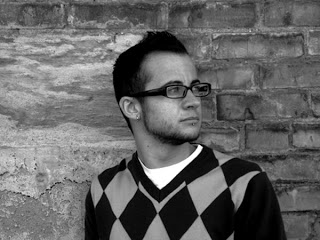 Ely Shipley currently teaches and studies at the University of Utah; he will receive his doctoral degree in Literature and Creative Writing this spring. He also teaches gender studies and facilitates creative writing workshops with queer youth. Boy with Flowers, winner of the Barrow Street Press Poetry Prize, judged by Carl Phillips, is his first book.

A number of lines in the book reflect the trope of something soft or ethereal becoming solid or real (e.g. “blown glass,// the shape of someone’s/ breath, held”; “I am a starfish hardening”; “I’d draw myself/ out of the dark”). This connects with another, more significant movement—the biological female becoming a male. But this project is less about the act of change, but rather the desire or need for it. How did you approach writing about this unique experience without resorting to excessive explanation?  What was it about poetry that allowed you to achieve this?

The desire, the very visceral and spiritual need for transformation is certainly the impetus for this project.  Many of the poems do stem from the impulse to concretize and actualize a subject position that common speech does not allow most of us to recognize, let alone inhabit comfortably.  Judith Butler mentions this dilemma in her groundbreaking book, Gender Trouble, stating that her intention is to “open up the field of possibility for gender” for those “who [have] understood what it is to live in the social world as what is ‘impossible,’ illegible, unrealizable, unreal, and illegitimate” (Butler, viii).  One “field of possibility” for me has been poetry.

Before the very slow process of my physical/medical change could happen, the only way to manifest my sense of myself externally was through language.  Quite literally and at the most basic level, this began with asking people to use male pronouns rather than female ones.  And yet, language that we use in common speech is limited; these little words, “he” or “she,” trap us into one of two categories.  Any attempt at explanation when one is in such a linguistic binary that dictates and limits understanding would not only be excessive, but impossible.  Someone who crosses these boundaries, or exists outside of them, and whose past seems to contradict his/her present or future self is left to negotiate uncomfortable interactions and potentially violent repercussions.

The language that everyday speech permits was not quite enough to capture or indicate the complexity of my experience.  In this way, everyday language simply fails to communicate the truth of one’s experience.  Poetic language, however, allowed, at the very least, a way to allude to such a circumstance.

Mark Doty writes in his book Heaven’s Coast that he must rely on figurative language, “metaphors” which he “mixes with abandon, because [he] is talking near the edge of the unsayable, at the difficult intersection of what [he] can feel but barely say” (Doty 8).  I find that poetic language can allow us to pursue sensations (through the sounds and images language is able to produce) that are, perhaps paradoxically, actually beyond language, while also allowing us to further question and explore.  I could not resort to explanation because, in fact, any explanation would be reductive.  Ideally, for me, poetry’s very intention is to open possibilities.  And so the proliferation of shifting images you mention is a gesture toward making visible and audible this mysterious interiority and longing.

One of the more explicit moments of activism in the book is the poem “Transgendered Teens on DC Street, August 12, 2002,” which calls attention to the victimization of transgendered individuals whose difference makes them targets of violence. What are you expectations for a book like Boy with Flowers, whose subject matter alone places it within the realm of politicized poetry?

I adhere to William Carlos Williams’ famous lines from “Asphodel, That Greeny Flower”: “It is difficult/ to get the news from poems/ yet men die miserably every day/ for lack/ of what is found there.”  Anyone who dares to read or write poems in our consumer culture is, in a sense, committing a political act.  While I am aware of poetry’s limitations as a political medium, I still believe that the documentation of one’s experience has an effect, certainly on the writer, and perhaps even on another, a reader.  This is true for me.

I don’t know that I could survive without literature that takes on negotiating otherness (and so many writers and artists feel they are outsiders).  If I have an expectation (though I might rephrase expectation as hope), it is simply to generate more possibilities, awareness, and to expand our capacity for compassion.  Allen Ginsberg once said that “poetry is a reclamation of an awareness of the world.”

The only other poetry book about the transgendered experience I can recall is Hilda Raz’s Trans (which engages the story of her son Aaron, who was once Sarah) published in 2001. Do you know of any others? And how will your next project be similar or different from your first book? Will you continue to explore with this speaker whom the reader encounters mostly during his youth?

Hilda Raz’s book Trans is wonderful (as is her and her son Aaron Link’s latest book of prose, What Becomes You, published in 2008); I’m sad to say that I don’t know of any other published poetry books about trans experiences.  I think this might be one of the reasons I am so drawn to reading queer theory alongside poetry; it fuels me.  I’m looking for ways to interrogate this subject.

The book I’m currently writing is a hybrid project straddling the genres of creative nonfiction and poetry.  For me there is an obvious connection between the form of this new project and its hybrid/trans subject matter as it too deals with questions of gender and queer identity.  It is informed by my academic research interests and current queer theories, specifically relating to queer temporality and futurity.

One could see a version of the same speaker in this new work, but one of my concerns for the current project is to allow the singular and lyrical “I” to open into a multiplicity of voices.  In fact, juxtaposing and collaging different points-of-view, personae, and a broad range of discourses (the voices of institutions, such as medicine/therapy; the voices of queer night life; voices from history, etc.) is one of the book’s modalities.  While I am still writing a similar subject matter, the form of the new project is more experimental and innovative.  Rather than a single voice or text telling a story, I’m interested in how intersecting voices and styles can defamiliarize language, and disrupt, or queer, narrative.