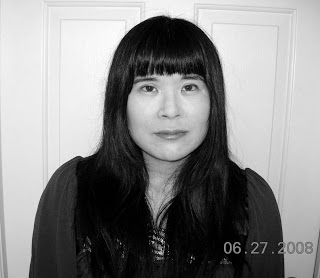 Claire Kageyama-Ramakrishnan was born in Santa Monica and raised in Los Angeles.  She received her B.A. in English from Loyola Marymount University in Los Angeles, earned an M.F.A. in poetry from the University of Virginia, where she was a Henry Hoyns Fellow, and completed her M.A. in literature at the University of California at Berkeley. At the University of Houston she was a Cambor Fellow and earned a Ph.D. in literature and creative writing. She is a full-time instructor at Houston Community College, Central Campus. Her second book, Bear, Diamonds and Crane, will be published by Four Way Books in 2011. She lives in Houston with her husband, Raj, a scientist specializing in HIV/AIDS research at Baylor College of Medicine, and their three cats.

In the poem “Amber Falls” the line “I name the tears of our childhood” resonates throughout the first two sections of the book. There is much exploration of trauma, especially when the poetry revisits the U.S. atmosphere during and after WWII: the xenophobia that victimized Japanese Americans, the internment camps. The witnesses are usually the children, those who survive to tell the story. Why is the perspective/ experience of the child most convincing? Why does it matter more than what the history books can tell us?

My students at Houston Community College offered their insights about the child’s perspective. Some said the experience of the child matters more because the child is innocent—“a blank slate.”  Others said, “Children are honest. They tell you how it is.” Another said, “History books don’t always tell the truth.”

My own response is to say I’m a poet, not a psychologist, sociologist, anthropologist, or historian. I don’t have the expertise to tell you exactly why the perspective of a child is most convincing or why a child’s perspective “matter[s] more than what the history books can tell us.” The history books that I was made to study in grade school, junior high, and high school didn’t discuss the Issei and Nisei in the internment camps. In fact, I don’t recall taking a college history class where a teacher mentioned the incarceration of the Japanese Americans. I learned about the internment because my relatives gifted us books on the subject and my immediate family visited Manzanar every summer on our way to Mammoth Lakes in Northern California.

My siblings and I learned what life was like at Manzanar from reading Jeanne Wakatsuki Houston’s and James D. Houston’s Farewell to Manzanar. After reading the book we watched the film adaptation on television. We saw what the barracks and mess halls looked like and how the internees waited in line to use the latrines and felt violated because the toilet stalls had no partitions.

Although my family visited Manzanar every summer, I never got used to the visitations. As a child the excursions left me puzzled and frightened. Here was a camp left in ruins, situated in the middle of nowhere; it was barren, dry, and dusty—abandoned, except for the two guardhouses and cemetery pillar that remained with rusty barbed wire fencing broken and scattered throughout the camp. When I walked around I felt that there was anger in the air from the spirits inside the camp. My father also seemed riddled with tension, distant in his thoughts, solemn with the reticence he possessed when he stood over his mother’s grave when he took us to Holy Cross Cemetery in Los Angeles Sundays after Church. My father became the enigma I sought to understand.

In graduate school I read more books on the internment—poetry, novels, anthologies, essays, photo documents, etc. After coming across an original copy of Ansel Adam’s Born Free and Equal at the U.C. Berkeley library, I started asking my father and uncle questions about Manzanar. I had to make sense of the legacy I had inherited for them and the rest of our family. I didn’t know then that I would search for answers writing poetry.

Part 9 of the title poem reveals that “Kageyama” means “Shadow Mountain.” And as the book moves into sections three and four, the material remains grounded on the Japanese American identity and space, but shifts into other spaces—Croatia, the tragic story of Ivan and Tvrtko. In a sense, the “mountain shadow”/ the poet’s literary terrain, expands and becomes more inclusive. In keeping with part 6 (“One Question, Several Answers”) of the title poem, is this book also revealing the several threads of this single artist? How do you see these disparate avenues coming together in the book?

I must admit that these questions struck a nerve.  I feel as if a wound has been reopened. Yes, the book in section four does shift to Croatia and the tragedy of Ivan and Tvrtko. The poems in that section mark a difficult period in my life.  Again there is a boy (like the boy in Part 1 “Gift Without Purchase” of the “Shadow Mountain” sequence) who grows into a man and experiences “the beat of defeat he never explains.” That boy, the son of Tvrtko and grandson of Ivan, finds himself abandoned, orphaned, and shunned by the villagers in Croatia. Unlike the brothers or boys in the internment section who collected arrowheads, Tvrtko’s son fears stones, finds redemption in his relationship with his daughters, though not necessarily in his grandfather’s art. Although he tries to have a stable and meaningful relationship with the speaker, he is broken and scarred by his past—the tragedy of losing his father with his grandfather’s involvement in the matter intensifies his pain and ambivalence. The speaker identifies with Trvtko’s son as someone who has been beaten down like her father. Whether she realizes or not, she is drawn to the way that both men have suffered unbearable trauma. Her love for these men, like the love she has expressed for her maternal grandfather in the poem “Papa,” and uncles in “Owens Valley, 1942,” remains abundant and pure. She feels no resentment or regret when her relationship with Trvtko’s son doesn’t work out. She sees the miraculous good and tragic flaw of Trvtko’s son and his grandfather’s art, and she is able to capture some of those qualities in her own art (“After Receiving a Lavender Bouquet From You,” “Song Played for You,” “Zagging Rivers,” “Poppy Seeds,” “Fig Tree,” and “Ruins.”) The metaphor of ruins from the internment landscape extends to poems about the geography of Croatia and Trvtko’s body, where the speaker “wanted to kiss [his] wounds, especially the one/ on his neck…and the one at the bottom of [his] spine, the scar marking/ a slipped disc of cartilage and vertebrae…”  She wanted very much to offer him and her father (in the internment poems) “words to comfort.”

You close the book with the poem “Origins of an Impulse,” an urgent poem about the cumulative rage that pushes the artist to her art—in this case, the poet to the pen. The legacy of history and identity kept alive through memory takes the reader back to the opening poem that describes DNA that, when uncoiled, can stretch beyond the place of oppression, because this strand is capable of transcending the moment, overcoming the plight, when there is a future. Is this the rage you call “love” in the final poem—resistance by perseverance? Keeping the family line alive as an act of protest?

No, the “rage” of internment throughout the book in the “Shadow Mountain” sequence is separate from the love in the final poem. The love in “Origins of an Impulse” is the embrace of the maternal. The speaker’s expression of love flows with warmth and affection for the grandmother in “The Grandmother I Called Mama” to the woman in “The Denver Lady,” to the mythological figure in “The Moon and Kaguya,” and sisters in “Amber Falls,” back to the mother and niece in “Origins of an Impulse.”  The artist’s kinship with these women moves her to recollect her relationship with her grandmother: “I am the child she wrapped/ in a kimono” and “she sang songs: cowpatch and/ mortar saving the crab’s/ children, and Momotaro”; about “The Denver Lady” she recalls:  “She sang to me one night,/ Go ne, go ne ne”;  similarly, the mothering Kaguya reassures her adopted “children…the platinum stars”: “I am the pickled moon of November./ Do not be afraid./ The terrible moon/ has gone away”;  the mark of sisterhood and maternal relations continues with the sister in “Amber Falls” telling her older sister: “I name the tears of our childhood,/ Amber Falls”; the speaker comes full circle, ending with the acknowledgement of maternal legacy;  the aunt says of the niece and (grand)mother in “Origins of an Impulse”: “It happened with love…when I saw my mother’s face in my face,/ when I saw her face in my niece’s face.” For the speaker in these poems, love is about celebrating matrilineal ties, remembering and honoring maternal origins. The passing of her grandmother and the Denver Lady moves the speaker to address her own mother’s mortality. What she finds when she looks at her niece, mother, and herself is certainly not “the nose of a gorilla,” but something intimate and empowering, life-giving and beautiful. They’ve inherited each other’s DNA and blood; they thrive and survive in each other. The speaker finds comfort in knowing her mother lives on in her niece.

In contrast to what you suggested, I don’t interpret the love as “resistance by perseverance,” though a reader might view it that way. As for “Keeping the family line alive as an act of protest,” I don’t anticipate that happening to my niece and nephew’s generation with respect to internment. My father’s 71 and a different person with them. He’s much more at peace with his past now. In addition, my niece and nephew don’t live next door to a schizophrenic neighbor. We did and he poisoned our dogs, called us obscenities and racial slurs. If my niece and nephew protest anything it’ll be to choose between a trip to Lego Land and Disneyland. At least that’s my hope. I am hopeful that things like the Iraq war will end by the time they make that transition from childhood to adolescence.

My niece and nephew have been to Manzanar with my brother and our uncle (their great uncle). They’ve stood before the newly erected plaque with names of people who were interned there, and they’ve walked around looking for obsidian flakes. They see Manzanar as a fun place to stop, and they enjoy wandering around the new museum. If they have questions they can talk to their father, two aunts, and grandfather. They can read my book with Jeanne Wakasuki Houston’s and James D. Houston’s Farewell to Manzanar when they are older and want to know more about our family history.