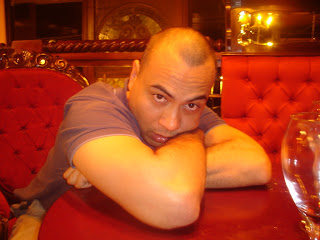 The Evolution of a Sigh, Hanging Loose Press, 2008.

R. Zamora Linmark is the author of Prime Time Apparitions and Rolling the R’s, which he adapted for the stage. He has received grants and fellowships from the National Endowment for the Arts, U.S.-Japan Friendship Commission, and twice from the Fulbright Foundation. He lives in Honolulu and Manila.

The poem “Surviving the Post American Tropics” is a key piece in this collection, which engages the issue of language as one form of survival. Readers encounter Filipino English, or “Filinglish,” but also Tagalog, and the language of technology, like communication via text messaging and instant messaging—all creating a unique avenue for intra-lingual puns and other language play. How does this parallel the history of the Philippines and its conflicted relationship with the U.S.? How do you see the shifts in language mapping the country’s dynamic culture?

In a country like the Philippines, with its history crammed with centuries of colonial domination from Spain, the United States, and, during the Second World War, Japan, language, to Filipinos, is as much a tool for survival as it is for re-education, or resistance. With the exception of Spanish, which was confined to the elite ruling class during its three hundred seventy plus years of reign over the islands, it is language that survived the centuries of colonialism.

And it has done so through the art of appropriation. Foreign words get re-defined. Idioms take on a local twist. The verb “salvage” means exactly the opposite to Filipinos—“to kill or rid of a person.” “Slang” refers to “accents.” The Spanish word “leche” is the cuss-word equivalent of “shit” or “damn.” And the list goes on and on because, to Filipinos, language is a project that’s always undergoing renovation or beautification.

In my years of living with Filipinos in America, the Philippines, Spain, and most recently, Japan, I’ve come to conclude that Filipinos cannot adopt a language without adapting it: a decorating process that involves a lot of tinkering and playfulness. Hence, the humor, inventiveness, malapropisms, puns that result from translating the English of Americans and British into the English of the Filipinos. Check out, for example, their signages, like “WANTED: BOY WAITRESS,” or those loaded with American pop cultures, like “ELIZABETH TAILORING” and “CHRISTOPHER PLUMBING: chief competitor of ee plumbings.”

The inventiveness and appropriation extend to the language of technology, to text and instant messaging. Not surprising, since the Philippines is reported to be number-one in text messaging, with ten percent of the population working overseas. The haikus in the collection were inspired from text messages that, abbreviated and codified, come off reading like miniature poems.

Instead of naming them “sections” or “parts” you use the word “portrait.” The book is comprised of four “portraits” of a speaker trying to make sense of a multi-faceted existence. He’s Filipino, he’s American, he’s gay, he’s an educated professional, and yet, he’s also a bit melancholy about how these different layers of his identity are sometimes in conflict with one other. This sentiment contrasts the level of humor that inhabits most of the poems. Is this also another binary (sadness/ laughter) that must be navigated by the speaker? Why is this exploration necessary for the speaker’s overall “portrait”?

I titled the sections “Portraits” for two reasons. First, to show the many sides—or identities—of the persona. He is Filipino. He is American. He is gay. He speaks several brands of English. He is an educated professional. And, in the spirit of Basho and other poet-pilgrims, he is a traveler. He is made up of these parts: parts that inhabit a world of their own, parts that, at times, are in conflict with each other.

The speaker recognizes these parts; he is aware of their individual histories and contradictions. And, like the Filipinos’ flair for fussing with language, he tinkers with these parts to create moods or moments (e.g. reflective, serious, fun, fierce), which brings me to my second reason. “Portrait” as word-painting—a still life or a tiny seen moment, as well as a landscape, the cities of Manila and Tokyo. These portraits are as much of these cities and the English languages that come out of them as they are of the parts of the poet that do not necessarily have to blend.

An element that leaps off the page is the use of key figures in literature and cinema: Tennessee Williams, Alan Dugan, Barthes, Kurosawa, Bunuel, Bergman, Eliseo Subiela and Douglas Sirk. These artists (and their work) serve as important catalysts for the speaker’s own perspective on religion, sexuality, social consciousness, love, death, etc. (There are also gestures in other poems toward Pedro Pietri, Bukowski, Neruda and, curiously, Jacqueline Susann.) Is this rich and varies tapestry of voices and visions yet another critical language to be learned in order to survive the “post American tropics”? Is this part of the “evolution of a sigh” referenced in the title—a necessary and unavoidable politics of all-inclusion?

Williams, Bergman, Barthes, Kurosawa, Bunuel and Co—these masters are my muses and their works are my models. Nothing extraordinary. Writers do it all the time, seek a comrade for inspiration, solidarity, troubleshooting assistance, or simply to start a dialogue between his craft and their work, which is my other reason for incorporating them in the collection. It is my way of paying homage to them and, at the same time, creating a discourse between the arts, between artists that can offer the reader several, if not new, perspectives on religion, sexuality, social consciousness, love, death, etc. Which brings me back to the use of “portrait” as word painting, a moment created from viewing a documentary on Ingmar Bergman or reading about Barthes’ object of desire.

These films, plays, and books could certainly be used as windows to other cultures and realities, as I had done when I migrated to Hawaii in the seventies, another former U.S. territory with its own brand of English called “Pidgin.” Though they exhausted my bank account, it was books, movies, disco—in general, American pop culture – that helped me eased into a place, a home, that was not yet mine. They became my tools for assimilation, sharpened my survival skills, provided me language and perspectives for the ever-evolving “I” to thrive in the post-American tropics.