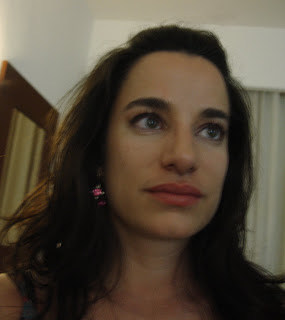 Gabriela Jauregui was born and raised in Mexico City. She graduated with an MFA in Creative Writing from the University of California, Riverside. She is a Paul and Daisy Soros New American Fellow and a PhD candidate in Comparative Literature at the University of Southern California.

The ground you cover is expansive—from the Middle East to the U.S.-Mexico international border—contentious spaces that evoke highly charged (and usually negative) opinions from people who don’t want to see past the American media’s facile and truculent representations of Mexicans and Middle Eastern communities. You respond to the complexities of these dynamics with poetry that is unafraid to engage in politics. How do you determine that a poem is the best method of addressing the troubled environment we live in, and not, say, an essay or an editorial? How do you respond to a critic who simply dismisses your work as “political poetry”?

I would let the critic know that I didn’t grow up and wasn’t educated within the U.S. paradigm that, for various reasons, as you know, is invested in dividing and polarizing “politics” from other aspects of life, and on constantly drawing and re-marking those artificial barriers.  I would also say to the critic that I certainly have no intention (or desire) to make pamphlets or political essays but instead look for le mot juste to convey a sense of urgency or preoccupation about certain things that go on around me everyday, and that I seek to convey them without making facile arguments or dichotomies.  Finally I would perhaps remind the critic that dismissing so-called “political poetry” is dismissing poetry, reminding him (yes, him, why not?) that there is no such division between politics and art: from the most abstract to the most concrete, all art is political.

I could also politely respond: “Thank you, dear critic, I’ll take that as a compliment!”

There’s a range of concrete tools that you employ in a few of the poems. The most familiar might be the concrete poem itself, the one about the 1968 Olympics massacre in Tlatelolco, which is shaped like Torre Banobras, the building that “witnessed” the event. You also incorporate the signs from the Mexico City subway system into the poem celebrating that nation’s capital. Then a poem with a drawing in lieu of a title. Other drawings open sections of the book, and other titles do more than label the poem—they “activate” the tone or even announce that they cannot be read as simply titles. In short, much creativity and open-mindedness is expected from the reader of this book. Who are some of your literary role models?

Thank you for those readings! I first came to poetry through two very different poets: John of the Cross and Charles Baudelaire, I was made to memorize both when I was a child, and they made a huge impression.  Then some of the writers I keep going back to are Cesar Vallejo, Vicente Huidobro, Paul Eluard, Haroldo and Augusto de Campos, Yusef Komunyakaa, Brenda Hillman, Francis Ponge, Velimir Khlebnikov and Diamela Eltit…and the list keeps going!

What are the origins (and the significance) of the loku interspersed throughout the book? Because it’s also a three-line poem, I assumed it was a play on the haiku, but because nothing is that simplistic in your book, it might have other implications. And secondly, where are you headed next in your creative work?

Well, on the surface the Loku are indeed playing on the Haiku, but thematically they’re the complete opposite of a Haiku—these poems are purposely just about the commonplace, they’re almost base.  And because of this, the name also puns with “low coup”—a low blow, a sort of roguish version of the Haiku (or high coup). Finally, the name also echoes the Spanish, loco, crazy, mad—loku: haiku gone loco.

As for my current and future creative work, I am working on a new poetry collection, Beast Language.  I am also finishing a collection of work written collaboratively with the Taquimecanografas, a group of female writers and visual artists living in Mexico City, NY and LA.  I am also translating (with Amaranth Borsuk) Paul Braffort, the Oulipo poet, into English; and finishing a long translation project of Tom Raworth’s poetry into Spanish.