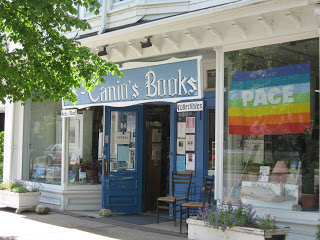 Canio’s Books in Sag Harbor was chockablock for the NBCC Good Reads 3 panel earlier this month. First up was poet and visual artist Star Black , who pointed out that the poetry books were mostly from the most prominent publishers of poetry—three by Farrar, Straus and Giroux, one by Norton. She described Marie Howe’s “The Kingdom of Ordinary Time” as “a pure pool of ordinary time,” and compared Howe to the French mystic Simone Weil.

The surprise of the spring list, she said, was Eric Gansworth’s “A Half-Life of Cardio-Pulmonary Function,” from Syracuse University Press. The book interested her in part because it includes paintings as well as poems (not unlike her own work, which includes poetry and collage). Gansworth, an Onandaga poet, novelist and visual artist, structured the book on traditional tribal wampum belts, which were used as mnenomic devices in his ancestral oral culture.

NBCC member Mark Ciabattari, a novelist and author of a forthcoming social history of the US in the 1940s. commented on Nicholson Baker’s “Human Smoke.” Baker focuses on a pacifistic strain that has mostly been written out of the history of World War II, he noted. But, he added, Baker lacked a sense of realpolitik; appeasement was not a strategy that would work against Hitler.

With these two articulate critics I had an easy job as moderator. Aside from pointing out the number of books with themes of war—the Baker book, Owen Sheers’s novel “Resistance,” which posits the Nazi occupation of England during World War II; Drew Gilpin Faust’s “The Republic of Suffering,” which chronicles death in the Civil War—I spent time on the fiction list, reading snatches of whipsmart dialogue from Richard Price’s “Lush Life,” and an eloquent scene in which a mother learns her addicted son has disappeared from rehab from Roxana Robinson’s new novel “Cost.”