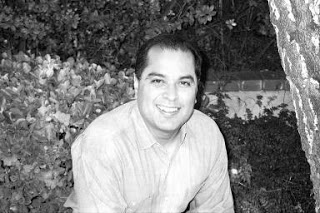 Daniel A. Olivas is the author of the story collections Devil Talk and Assumption, the novella The Courtship of Maria Rivera Pena, and the children’s book Benjamin and the Word. He has a book of poetry forthcoming from Ghost Road Press in 2010, and another short-story collection to be published by Bilingual Press in 2009. A co-blogger on La Bloga (which is dedicated to Chicano/a and Latino/a literature), Olivas practices law with the California Department of Justice in Los Angeles where he makes his home with his wife and son.

A mini history lesson: The city of Los Angeles was once called by the Spaniards who founded it in 1781, El Pueblo Nuestra Senora la Reina de los Angeles de Porciuncula. In 1821 Mexico declared its independence from Spain, and the city (and much of what is now known as the Southwest) came under Mexican rule. The year of the Gold Rush, 1848, California (and the aforementioned Southwest) became a territory of the United States after the controversial Treaty of Guadalupe Hidalgo. History shows such a preoccupation with sovereignty, and yet, culturally, the city (and state) has thrived from these various shifts in national identities. This anthology taps into one of those identities: Latino. What will the reader learn about who Latinos are, and more specifically, who California Latinos are?

Yes, I think there is certainly an undercurrent of disruption arising from the forced multiculturalism that is endemic to California’s shifting sovereignty.  This has resulted, I believe, in a great complexity of experiences which I hope comes through when you read the stories and novel excerpts that make up the anthology.  The narratives include protagonists such as journalists, cement pourers, folklorico dancers, curanderos, teenage slackers, artists, wrestlers, saints, priests, druggies, script writers, college students, and even a private detective.  Just this listing of characters demonstrates the two worlds (i.e., pre- and post-1848) that are being straddled.

Moreover, I tried to include Latino writers who were not of Mexican ancestry.  Thus, we have stories by writers who have roots in Cuba and Brazil.  I wished that I had included more stories by other non-Chicanos but much was dictated by what I received in response to my call for submissions.  Not surprisingly, I received work primarily from Chicano/a writers.

I also note that the protagonists represent all ages, income and education levels, and various immigration histories.  We have gay and straight characters, people who are single or in committed relationships, folks who are political and those who are not.  Also, virtually every style of writing is represented which is one of the facets of the anthology that is most gratifying to me.  Each piece brings the reader something different from the last one read.

Finally, though it is difficult to pinpoint, the Latino experience in California, in general, and Los Angeles, in particular, is tied rather dramatically to the State’s varied terrain (from beaches to mountains to deserts to asphalt), dependence on the car to get virtually anywhere, the freeway system, almost unrelenting sunshine, and the entertainment industry.  I don’t believe that the stories in the anthology could be transplanted to, say, Denver or El Paso or Las Vegas.

Latinos in Lotusland limits itself to short stories and novel excerpts, including a piece from Richard Vasquez’s groundbreaking 1970 novel Chicano, and a piece from a consummate California writer, Helena Maria Viramontes. You also include (among others) three much-celebrated writers in the early stages of their promising careers, Reyna Grande, Alex Espinoza and Manuel Munoz. Why are stories and books such an important component of Chicano/Latino cultural production?

I think that we use storytelling in book form the same way our elders used oral storytelling: to pass on culture, life lessons and a sense of place.  In many ways, I think there is more truth in fiction than there is in so-called non-fiction.  When someone writes an autobiography, so much is left out, so much is inflated, so much is shaped into what the writer wants others to see.  In fiction, all that matters is the story.  It’s safer because the writer can always say: hey, it’s not true, it’s just fiction.  That sense of safety has allowed many writers to produce some of the truest fiction around.

Your introduction doesn’t mention why that word— “Lotusland” —appears on the title. Besides its alliterative value, are you trying to bridge a connection to another state of existing/being or with the Asian populations in the Southwest, which are also sizeable and significant?

As Gary Keller (Bilingual Press’ director) and I kicked around ideas for naming the anthology, he suggested that we use a nickname for Los Angeles.  The city had been disparaged by many a writer (usually those who moved here from elsewhere) with such nicknames as La-La Land, El-Lay, etc.  One such nickname is “Lotusland” which harkens back to the mythological race of lotus (or “lotos”) eaters “represented by Homer as living on the fruit of the lotus and living in a state of dreamy forgetfulness and idleness” according to The New Shorter Oxford English Dictionary.  Thus, the term has entered the English language to mean “a place or state of idle pleasure and luxury, contentment and self-indulgence.”  (Websters New Millennium Dictionary of English.)  So, some clever wags have pinned it to Los Angeles’ lapel.  Similarly, as William Safire noted in a New York Times essay:

“La-La Land is a play on the initials L.A., perhaps influenced by Lotos-land in ‘The Lotos-Eaters,’ a poem by Tennyson: ‘In the hollow Lotos-land to live and lie reclined / On the hills like Gods together.’  In his 1941 novel, The Last Tycoon, F. Scott Fitzgerald had a character describe Hollywood as ‘a mining town in lotus land.’”

So, I use the name “Lotusland” ironically because, as I note in my introduction: “[N]otwithstanding the fact that the characters who populate this anthology may have feasted on the City of Angel’s lotus flowers, they do not live in blissful oblivion and they certainly have not forgotten who they are.”  I thought long and hard about whether I should explain all of this in my introduction but I decided to allow readers to do a little exploration if they were curious.  Many readers who live in Los Angeles chuckle when they hear the title and readily understand the allusion.