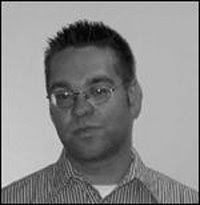 Steve Fellner’s debut collection of poems won the 2006 Marsh Hawk Press Poetry Prize and the 2008 Thom Gunn Award for Gay Male Poetry from the Publishing Triangle. He is currently assistant professor of English at SUNY Brockport.

A mini-essay from the award-winning poet:

My question: was that good or bad?

To me, it sounded like a lot. I had been lucky enough to win the Third Annual Marsh Hawk Press Poetry Book Prize, judged by Denise Duhamel, which resulted in the publication of my book.  Marsh Hawk Press’ editors, particularly Sandy McIntosh, the late Rochelle Ratner, and the brilliant cover designer Claudia Carlson, were nothing but kind to me.  I had no choice but to ask myself: did I fail them by not selling more than 138 copies in over a year?

If I wasn’t so self-conscious, maybe I could have scheduled more readings, and then inevitably sold more books.  We’ve all heard about those controversies that flare up from time to time, where certain presses are accused of rigging their contests.  But I suddenly felt a surge of empathy for those who cut corners and publish people they already know and love.  Would I want to put all the time and effort it takes in producing a book for a total stranger?  Who doesn’t want to say ‘the hell with it’ and just accept and embrace the familiar?

And, of course, gifts come with their own set of problems.  Once you give someone a book, they then feel obligated to claim they read it, and most likely, will offer some vague comment at a later date that it was “interesting” or claim they “thoroughly enjoyed the voice.”  I honestly never expected anyone to do anything more than skim over a few pages.  People have busy lives, and shouldn’t be wasting time looking at my poems.  They should be going on dates, seeing bad movies, eating food that’s way too expensive. The world would be a much better place if people went on more dates.

So by self-servingly trying to make everyone else feel special, did I sell less copies and make my small, hard-working press feel less special?  Marsh Hawk Press, to its credit, never made me feel bad about selling 138 copies. The collective has been exceedingly generous in inviting me to readings, and celebrating the kind reviews I have received.  But you never know if you’re doing enough.  I listened to the nice things the collective said to me, but it’s a poet’s curse, even an insignificant one like myself, to constantly be searching for something behind what people say, beyond their words.  Something that will lead to other words.  Possibly scary, unwanted ones.

And the poet’s mind obsesses as much about the art’s form as the distribution of the art itself.  Maybe if I didn’t give anyone a copy of my book, I would have sold 178 copies as opposed to a mere 138, and more people, like the friends of friends of friends, would have actually read the book, because they would have shelled out their own money.

Then again, I find, strangely enough, I’m more likely to purchase the books of people I don’t like, my enemies who don’t even know I exist.  I’ll pre-order their book on Amazon.com and when it comes, I’ll wait to open the package until I’m home on a Friday night.  I’ll invite a friend over, another minor poet.  Then the ceremony begins: we’ll open up a cheap bottle of wine and read the prize-winner’s words aloud, laughing at the dumb ideas, the obvious flaws.  We pour ourselves another glass when we are reminded that the judge was the one who we at one time so eagerly dreamed would choose our book.

So many people complain about the perverse oversaturation of the poetry market and what a debacle AWP has become.  I agree.  To a point.  But as a creative writing teacher once told me when he was forced to read rough drafts of my work, “Always remember: creating is better than not creating.”  And for the most part, people are trying to do good with their words, however warped their idea of good may be.  The most wonderful, comforting aspect of the sheer near impossibility of being recognized, the enormity of the market place: everyone becomes like everyone else, clamoring for their little bit of attention, love.