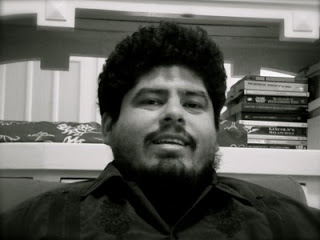 Javier O. Huerta is currently a doctoral student at U.C. Berkeley, where his research interests include the naughty poetics of Keats and the rhythm of immigration. His debut book of poems received the 31st Chicano/Latino Literary Prize from U.C. Irvine.

In lieu of the usual 3-question format, the following: a mini-essay written by Huerta that covers some fascinating ground on the question of Chicano poetics.

“Chicano Poetry and the Bilingual Pun”

I begin with a bilingual joke:

This joke never fails to get a good laugh from an audience. Of course, I only tell it when I know that the majority of my audience is bilingual, i.e. at a writers’ conference in Monterrey, Nuevo León, México, at the 1st Annual XWG Noche de Florycanto, and at the Acentos Marathon Reading at Hunter College in NYC. The humor of this joke does not survive explanation. As Charles Lamb says in one of his Elia essays, “The puns which are most entertaining are those which will least bear an analysis.” The “I glove you” works because it is based on a bad pun, and the worst puns are the best puns. Lamb describes the “worst (best) pun” as “something so whimsical, yet so pertinent; so brazen in its pretensions, yet so impossible to be denied; so exquisitely good, and so deplorably bad, at the same time.” In case you still need/want an explanation. The word for “glove” in Spanish is “guante.”

The bilingual pun, I believe, is central to the tradition of Chicano poetry. The use of Spanish in the poetry of Chican@s has been read as part of an identity poetics. This understanding sees the use of Spanish as a marker of the poet’s ethnicity. For the non-Spanish speaking reader, the Spanish is important not because of what it says but because of what it symbolizes. I decided to attend the Bilingual MFA program at UTEP instead of the other two programs to which I was accepted because I did not want to be known as that-poet-who-uses-Spanish. My classmates were from all over Latin America. It was not enough to simply write lines or poems in Spanish; I had to write with an awareness of the complexities of the language. Chicano poetry has always been aware of this complexity. The use of Spanish as an expression of one’s ethnicity is important, but Chican@ poets also deal with the complexities/uncertainties of living a bilingual/bicultural experience. This is especially displayed when the poets decide to write for a bilingual audience. Spanglish is an important result of this, one that I wish to discuss in another post. Here I will continue with examples of the Spanish/English pun.

One of the most key moments in Chicano literature is when José Montoya rewrites Gertrude Stein’s famous line as “Arroz is Arroz is Arroz.” Indeed, so exquisitely good, so deplorably bad. Against Lamb’s advice I will attempt an explanation and then an analysis of this most entertaining pun. Explanation: “arroz” sounds like “a rose” but means “rice”; one can even go on to say that rice sounds like “rise,” which is the present tense of “rose.” Analysis (borrowed from a friend; it never occurred to me to analyze such a line): the rewriting of the line is a move from aesthetics to dietetics, from purposelessness to purpose. My friend is a brilliant critic, but one must admit that this analysis, or any other analysis, both cannot say it all and says too much.

A more recent example of the bilingual pun appears in The People of Paper by Salvador Plascencia. (I include this work as Chicano poetry. I dare you to say that it is not.) For those who don’t know the novel, it is experimental (keep the connection of experiment and experience in mind), and one of the experimental aspects is its self-referential nature. The “work” is supported by funds from the “Ralph and Elisa Landin Foundation” but “while the millionaires were trusting, their lawyers were not. There were provisions that had to be met: everything had to be inventoried and cataloged” (113 of the paperback edition). This includes the

Tell me this wordplay is not shameless; it is awful. But how brilliant at the same time. No, there will be no analysis of this. Simply let me share with you what I felt when I first read it. For you see, I had to put the book down in a moment of disbelief. Did he just do that? Chava, keep your typographical innovations and your layers upon layers of narration. But Oh! what insight you have stumbled upon! I think then of my mother listening to el principe José José croon “lo pasado pasado.” Yes, the past cannot be spelled without sadness. And what can be more nostalgic than carne asada. O Sal, how dare you.

But I want to insist that the bilingual pun in Chicano poetry does not originate in isolated language experiments. For many Chican@ poets, the language experiments are conducted in the everyday. This past month I went to see Lorna Dee Cervantes read in the Heller Multicultural Lounge at UC Berkeley. She explained how she grew up in San Francisco on a street called Bird. It was actually an avenue so the street sign read “Bird Ave.” She thought it interesting, she said, that the street sign was bilingual. This blew me away. Explanation: the abbreviation for “avenue” is the Spanish word for “bird.” She then read a brilliant poem with the title “Bird Ave.”

I like to think that the Chicano bilingual pun is not simply a result of poetic wit. I like to think that it is a result of everyday misunderstandings, misreadings, mistranslations, and mispronunciations. “Glove” as a misspelling of “love” is a mistranslation of “guante”; “Arroz” is a mispronunciation of “a rose”; “Bird Ave” is a misunderstanding of “Bird Avenue.”

I often joke about the fact that I struggle daily with both English and Spanish. Yet I think there is great poetic opportunity in that struggle for Chicano poetics. (For now, I’m including immigrant poetics in this. After all, who is more Chicano than the immigrant poet alurista?). I leave you with one last bilingual pun. I sometimes find myself reading a work and encountering a word like “pie.” (There are a number of other examples, but Friday was National Pie Day; the date was March 14.) A misreading of “pie” can become an uncomfortable situation. Getting it right is crucial. Is it “pie” like all-American apple pie? Or is it “pie” like the Spanish word for “foot”? Careful, one belongs in your mouth; the other sometimes just finds its way in there.

Q: What does a glove say to another glove?