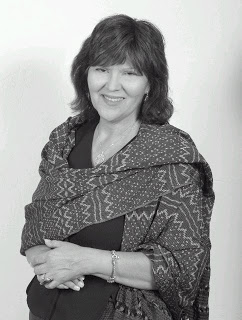 If I Die in Juárez, University of Arizona Press, 2008.

Stella Pope Duarte is also the author of Let Their Spirits Dance (2002) and the story collection Fragile Night (1997). A social and literary activist, she is a highly sought-after speaker for audiences of all ages on topics related to her work, as well as on issues related to women’s rights, diversity, Chicana/o culture, history and storytelling.

The long-standing problem of the unsolved murders of hundreds of young female sweatshop workers along the U.S.-Mexico border has received minimal attention from the mainstream media. It was the subject of an unsuccessful Jennifer López vehicle (Bordertown) and a few short-lived headline-grabbing marches led by Hollywood actresses such as Sally Field and Jane Fonda. What do literary works like If I Die in Juárez (and previously, Desert Blood by Alicia Gaspar de Alba and The Guardians by Ana Castillo) have to offer to this greater cause?

Literary works that seek to capture one of the most horrific crime sprees in the history of modern times deserve recognition by the mere fact that they address the darkest aspects of human nature while telling an intimate story inviting readers to share in the terrifying experience of living in a border town such as Ciudad Juárez, now known as the “capital city of murdered women.” News stories, films, and documentaries are crucial in setting up a foundation of research into the history of violence towards women, but it often takes a well-written story to delve into the intricacies of human nature uncovering connections to the occult, machismo, globalization, and the discounting of the working poor by political regimes that have no regard for human rights.

Your novel doesn’t attempt to write the stories of every young victim, but through the narratives of Evita, Mayela and Petra, the reader receives more than a cursory glance at how poverty and an unstable international economy affect every citizen, regardless of social standing, and create an environment that is both hostile and dangerous to women. Can you discuss the process of writing this project? How did you approach writing a book of fiction about such highly-charged political issues that are not fictitious?

I was haunted by the Juárez murders: hearing news stories, watching marches into Juárez on TV, and listening to the testimony of mothers whose daughters had been murdered. It was the story I read in the Observer (2000) of three young women, apparently friends, who had been found buried in the desert in shallow graves lying side by side—their bodies in the shape of crosses—that caused my final surrender to the project. The girls had been tortured, raped and mutilated; their arms chopped off, and their stomachs ripped out. Discarded close by were their maquiladora (factory) uniforms. They were 16, 17 and 18 years old, and had been employed in an American factory doing business in Juárez. Even writing about this particular case, whose murderers have never been found, makes me want to cry out for justice! For me, it was the last straw. I cannot look away when a helpless person is suffering, it is simply intolerable for me, and thus was born the dedication to write a story from the perspective of young women actually living in Juárez.

It was my goal to have readers “walk in the shoes” of the women, experiencing life full-force, holding nothing back. Once this decision was made, it seemed the universe responded, and sources came from the most unexpected places to guide me deeper and closer into the Juárez murders, also described as femicides. My trips to Juárez, numerous interviews and long hours of research all paid off, as the portrait of the three young women emerged, each one unique and telling her experience from another layer of life lived by the working poor. They were tied together by blood, murder, betrayal, and the desperate need to survive against all odds. I left no stone unturned in writing the story, implicating the Mexican police and a notorious drug cartel. Writing the story creatively gave me a huge scope: I was able to explore the anguish of the victims’ families, the lives of Americans living in Juárez, and a range of local characters from those involved in the occult to those committed to saving the girls. I even delved into the thoughts and intentions of the murderers. Staying close to historical facts was a given, and proved to be the best way to craft a story that resounded with the stark reality of murders that continue to this day.

Though the novel ends on a more hopeful note, the tragedy of the murders along the border has neither closure or, it seems, a glimmer of hope. Why this decision to cast an optimistic light on this story? How did your research and conversations with the families of the victims guide the direction of the project?

The first drafts of the novel were written with details that made the reading of the work difficult for some readers. Descriptions of torture were too hard to bear, and I took this into account as I restructured a story that still delivered the facts, but by sparing the reader undue anguish. I found the facts so horrific, as I myself read accounts of mutilations, that I found it necessary to select specific details and leave the rest to the reader’s imagination. This was a better style for the book, and allowed me to include the routine of family life, fidelity, friendship, love, celebrations, traditions, ancient magic, and the day-to-day struggles of a determined people. I saw in the women I interviewed, a resiliency—a power from within to stand their ground on behalf of their daughters. They had not given up, they were not ever going to give up, in spite of intimidations by police, and investigations gone awry. In the novel, my street child, Evita, keeps a “little space hidden in her memory for the hope of peace…”

This optimism seemed like something the women did—kept a space in their hearts open for justice, for the return of their daughters, for the hope that someday their efforts would pay off, and the murders would end. I found myself flowing into this energy, felt embraced by it, buoyed up by a force that surprised me, and gave me new hope.