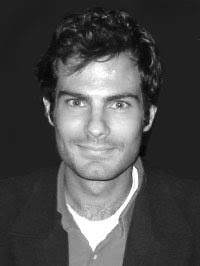 Dear Regime gives new meaning to the term “poetic justice,” since it presents a critique of your family’s homeland, but also an appreciation for Persian culture, which continues to be misunderstood by the Western world. How did you position the speaker of the poems to effectively express this complex relationship with the subject matter?

The two respective governments of Iran and America certainly tend to speak and act in terms of rigid dichotomies. You know…like President George W. Bush’s infamous warning to nations of the world that “You’re either for us or against us.” On the whole, the speaker in this book is positioned like the majority of Iranians who love their country yet resent its leadership (I think a lot of Americans have felt the same way).

Humor has been the most affirming method for me, especially because it cuts both ways.  When I read at the new MFA program at Queens College, both a Canadian professor and an American graduate student offered a great reading of the book, saying something to the effect that they initially laughed, then felt a little guilty for doing so, like maybe they weren’t supposed to find it funny from their subjective positions. Too often in past depictions of the Middle East, I come across over-romanticized images that don’t prove very challenging, inviting the western reader to visit the figuration of the country as a kind of travel guide.

As an Iranian-American, I’m privy—along with so many other hyphenated identities—to what Homi Bhaba calls a “Third Space,” a formative place between two fixed positions. In this position (the first Iranian American anthology was aptly named A World Between) I view America from Iran and vice versa, moving between cultures, even languages, to both clarify and confuse.

The Iranian-American relationship in the later 20th and early 21st century is now more than ever charged with a figurative and (possibly) literal nuclear energy. I let the speaker of this book inhabit this place through poetry. He becomes, by turns, hysterical, grave, confrontational, and passive-aggressive. In many ways, he refuses to ultimately reach a kind of definitive signification.  Resisting the will to define at times has been really frightening for me as a poet, but also rather exciting.

Can you discuss the process of incorporating humor into your poems and the challenge of writing a book of poetry that takes a clear political stance (from a distance) against the censorship and oppression of artists by the Iranian government? Are these connected?

Throughout the writing of this book, I experienced a kind of terrifying ecstasy by telling the great family secret. Growing up in San Antonio, Texas during the time of the Iranian Revolution and the hostage crisis, I was repeatedly warned by my father not to tell people we were Iranian. I’d answer the phone and hear death threats, our home and family car were vandalized, etc. On a recent trip to Iran, as an adult, I discovered that my eldest uncle had served under the former Shah, something my father had never told me. Evidently, he was assassinated during the revolution.

Now, nothing about this sounds funny, especially my father’s very real fear—which he shares with so many Iranians—about speaking out against the Islamic Republic. I myself tried to repress the material. Then, upon my return from Iran two years ago, I gave myself permission to let go. I just couldn’t be afraid anymore, for him or myself. Ultimately, the humor came from this transgression, allowing me a kind of perverse pleasure.

The humor and the political stance against the Iranian government’s treatment of artists are definitely connected. I don’t just mean to the current regime, but to the history of government in Iran. Once I had the good pleasure of visiting a very respected Persian historian in his Tehran apartment. As he sat in his underwear drinking tea, he flipped through the history of poetry in ancient and modern Iran. At just about every other poet’s picture in the book, he’d pretend to slice his throat, giving me an idea of just how many were killed for what they wrote.

Humor continued to provide me a double-edged sword, so to speak, in which I could both call attention to the kind of oppression threatening writers in Iran while cutting the all mighty government down to size. I doubt that writing such a book can make much of a difference. To this end, the somewhat dark, twisted humor also reinforces the kind of fatalism that many Iranians feel towards the political situation in their country.

What has been the reception of your book by the Iranian community in the United States? What do you hope readers outside of that community will take with them after reading Dear Regime?

So far, the Iranian community has embraced this book more than I ever imagined. Recently, as part of the Persian Arts Festival, I was the featured reader for Shab-e She’r (Night of Persian Poetry) at the Bowery Poetry Club in New York City. The audience was divided as if at a wedding, half the crowd, on the right side of the room, was American like my mother. The other half, on the left side, was almost exclusively Persian, like I was seeing all my relatives on my father’s side of the family back in Iran.

I opened the reading in Persian, telling the Iranians I wrote the book for them. Even though it’s in English, their reception means perhaps the most to me, because I’ve tried to capture what I most love about Persian culture while speaking out about a particular kind of oppression Iranians know all too well. Thus far, since winning the award and seeing my first book to publication, nothing has been more gratifying than hearing them laugh at all the humorous parts and seeing them nod their heads in agreement at key moments during the reading.

When I finished reading the last poem, they didn’t stop applauding for about two minutes, to the point that I got self-conscious. They all bought books too, and for at least that night, I felt a rock star.  One Persian woman who didn’t speak English that well came up during my signing, telling me that this is the first book of poetry written in English that she truly understands, adding that I really spoke for our Persian culture.

As for the American side of the room, the book obviously is for them too. I want them to experience the kind of disorientation—through humor, form, and disparate subject matter (popular culture juxtaposed with ancient tradition, western paired with eastern sensibility, etc.)—that makes Iran more of a complex country than they see represented in the media.  More than anything, I want to challenge the Orientalist gaze fixated on the veil (in this case the Iranian chador). I tried to do this in the book by setting up then violating expectations. Also, as grave as the situation appears in the Middle East, I want my American audience to understand that Iranians especially have a tremendous sense of humor, as well as deep sense of the poetic tradition.

(This mini-interview entry initiates a weekly series on Critical Mass that will spotlight recent and notable works published by small, independent and university presses.)