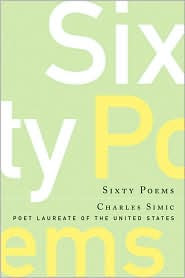 NBCC members and finalists and winners of our book award were eligible to vote in the winter edition of the NBCC’s Good Reads. Poet and critic Barbara Berman, whose chapbook, “The Generosity of Stars,” can be ordered from finishingline press, voted for Charles Simic’s SIXTY POEMS. She quoted from her own review of the book in saying why:

“Charles Simic’s visual effects are heightened by poignant, often harsh details that match the best of Bruce Springsteen, who has credited Flannery O’Connor as inspiration for his brilliant album “Nebraska.”  The early and late work of Simic displays similarly acute attentiveness and scene-building that explores inner and outer realms.

“Shelley,”  from “The Book of God and Devils” is beautifully gritty.
Conscious of his “atrocious Slavic accent,” a phrase at the begining of the poem, Simic first encountered the poet in Manhattan.  The reference to his accent highlights the effort to ease his isolation as a new immigrant, and the awkward pleasure and value of reading aloud in a new language.  …………..

With equal mastery of atmosphere, Simic also brings haunting loveliness to the end of a poem called “Late September.”

This morning felt like Sunday
The heavens did their part
By casting no shadow along the boardwalk
Or the row of vacant cottages,
Among them a small church
With a dozen gray tombstones huddled close
As if they, too, had the shivers.

If Hawthorne has a ghost, it hovers nearby with an approving gaze…….

Anyone who reads Charles Simic’s poems or his expansive, humane literary criticsm will experience what the late, under-appreciated Howard Nemerov, himself a winner of a Pulitzer, said so well :

“O swallows, swallows, poems are not
The point.
Finding again the world,
That is the point.

—Barbara Berman’s chapbook THE GENEROSITY OF STARS can now be ordered from finishinglinepress.com