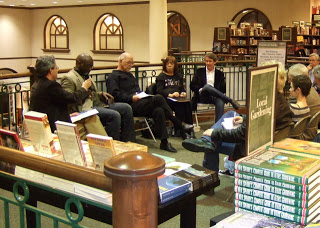 Having me recap tonight’s “Good Reads” panel is like having a writer review his own book: I can tell you all about how I hope things came across, but I can’t play my usual role of the objective journalist.

When books coverage became my job back in late 2007, I assumed that the best part would be what I got to read. Instead, much of the delight has instead come from whom I’ve met — intelligent people. Concerned people. Expressive, entertaining people. Book people.

I had four delightful book people on stage with me at Barnes & Noble Lincoln Park, and I felt honored to help them talk about how we spread the word about great books — and letting them champion their own favorite reads.

Some moments that seemed to get at the heart of what we were attempting:

—Critic and radio commentator Tom Dodge discussing how a good book grabs you right in the heart — and then describing the delight he got from a couple of titles he reviewed last year, such as “Hecho en Texas” and Harry Hunsicker’s “Crosshairs,” each of which, he said, changed the way he viewed a genre of literature.

—Author Ben Fountain talking about how he initially had expected his own book, “Brief Encounters With Che Guevara,” to be reviewed on a few pages and then promptly forgotten — and how he was pleasantly surprised when word spread to independent booksellers and others who turned it into a hit. Ben also recommended several titles —among them, “Waterloo, ” by Karen Olsson; “Desert Gothic,” stories by Don Waters; and “Rules for Saying Good-Bye,” by Katherine Taylor.

—Poet Isabel Nathaniel told a story about a book recommendation that had a 20-year life span (a story I am hoping she will share with the blog later) and gave a wonderful, appropriate reading about the sensual feel of a book, from “Gulf Music” by Robert Pinsky.

—Critic Walton Muyumba closing the presentations by reading a selection from a friend’s essay in “Best American Nonrequired Reading 2007.” Walton read D. Winston Brown’s “Ghost Children” with a quiet passion that seemed to show how much the piece connected with him — and, in so doing, his passion, for that moment, became ours.

This, to me, is the magic of what we do as book recommenders — whether in a professional review or a casual conversation, we take a writer’s words, make them our own thoughts and put them on the hearts of those around us. And three humans become connected in the process.

About 30 people turned out for the event . It was a delight to see them lingering afterward to continue the conversation, view the display of “Good Reads” titles and take a few home to sample. The audience was full of familiar faces — authors, scholars, publishing professionals. People who asked good questions and gave interesting responses. Book people. Like the panelists, they made me laugh and made me think. It’s an honor to be connected with them.

—Mike Merschel is the book editor of the Dallas Morning News. You can learn more about his section at the book blog, Texas Pages.