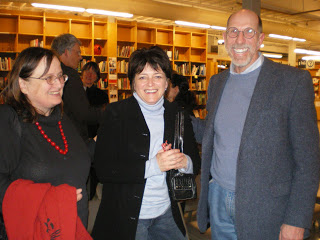 About 150 reading aficionados showed up Monday night for the NBCC “Good Reads” panel at Powell’s in Portland, where writers Katherine Dunn (“Geek Love”), Chelsea Cain (“Heartsick”), John Strawn (“Driving the Green”) and Peter Rock (“The Bewildered”) came together to talk about book publishing, book reviewing and their uneasy convergence. As moderator, I had at least a dozen questions prepared to fill the blank space, but not to worry: The discussion practically carried itself. All the panelists seemed to agree that book criticism is an essential part of keeping alive the conversation about books. The New York Times Book Review, The New Yorker, The New Review of Books and Entertainment Weekly were cited as ready reference materials.

And yet, the picture painted was not all that sanguine: Too often, reviewers opine on the most likely suspects (Roth, DeLillo, etc.) rather than breaking ground for worthy newcomers, it was noted. The upshot of most reviews is a thumbs up or thumbs down, with a “take my word for it” attitude rather than a sense of why the book does or does not work.

But maybe that’s good enough. Non-writers are looking for information or entertainment, not technical details, said Cain, which is why “you can be a good writer but a bad reader. The best reviewers are good readers.”

Dunn said she never reviews a book she doesn’t like, because she knows how it feels to be greeted with a negative review (not good). Cain said that when she reviews for The New York Times Book Review, she’s encouraged to engage other subjects – say, the writer’s background – rather than spend the length of a review (little essays, as the NYTBR prefers to see them) beating up on a book (how many ways can you say, “This book stinks”?). Rock said he was less discouraged about having his books reviewed negatively than not having them reviewed at all.

Asked to name one under-appreciated writer, the panelists picked Tim Winton, John McGahern, Somerset Maugham and Val McDermid. When asked how they decide what they read, all the panelists agreed that it is much more word-of-mouth than anything else. Rock said his students at Reed College tend to read each other’s work – as a member of the audience noted, national media fails to reflect the variation in regions, much less contained communities. Strawn said his reading habits follow his curiosity, to the tune of about a dozen books at a time (including, of late, “The Audacity of Hope,” “The Looming Tower,” “What Is the What,” “The Lost Heart of Asia”).

Dunn, who said she’s as likely to take a tip from someone on the bus as a published reviewer, recalled a seminal moment in the ‘60s when she was working as an artist’s model and observed one of the art students spending spare moments with her nose in a book. “I’d never heard of ‘The Tin Drum’ or Gunther Grass, but I took my $25 modeling fee and went to a bookstore and bought myself a copy.” It was the kind of reading experience, she said, that changed the way she looked at the world.