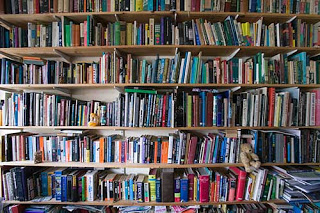 The following post on the avalanche of books reviewers receive comes to us from long-time NBCC member Alan Caruba.

I have been reviewing books since the 1960s and am a founding member of the National Book Critics Circle. For years I have also been a judge for the Publishers Marketing Association’s Benjamin Franklin Awards.

There are too many books being published.

I know that may sound like apostasy, but you don’t get an average of 150 books a month. I do.

I can pretty much judge a book by its cover. This is particularly true of the insane deluge of self-published books from pay-to-print operations like iUniverse, Xlibris, and Author House, to name a few. As far as I can tell, a number of authors create their own publishing firm to put out their books. The truth is that a handful of such books in any year are quite good, but I doubt that any reviewer has the time to sift through the deluge to find the pearl.

There is a reason why reviewers tend to favor the mainline publishers, large and small. They do it to pay their employees and, ultimately, to generate a profit. They mostly manage to do so successfully enough to cover the losses from the books that become “remainders”, an odd name for books that just do not sell.

I personally think it is obscene to give some celebrity an advance of millions of dollars and I take a certain pleasure when their books fail in the marketplace.

Truth is, I cannot give the tons of books I receive to local libraries. I stopped doing that long ago when I discovered they really didn’t want them any more than myself. Even a library has a finite amount of space on its shelves. Instead I give as many as possible away to anyone who loves to read, usually folks where I reside.

The reason I say there are too many books being published is that, from experience, I can tell you that, after a while, one concludes that the world does not need another cookbook, another diet book, another garden book, another get-rich-quick book, another how to manage your corporate team book, another book about dogs or cats? How many travel books about Hawaii or any other place on Earth are needed?

I cannot tell you how many World War II, Korean, Vietnam and now Iraq War books I receive every year. This is true also for books about the Holocaust. These events were momentous and tragic, but why must we read every book by everyone who participated or survived them?

Memoirs by people nobody ever heard about are a mystery to me. Biographies of equally obscure people baffle me.

Then there are the novels. I am convinced that the current generation of retirees, tired of playing golf or some other pastime, have decided to sit down at their computer and write that great novel they have had running around in their head for years. And it’s not just retirees. It’s everyone who can belly up to the keyboard.

There is no way to describe the volume of novels being published these days. I received one today by an author who has written “over sixty thriller and supernatural novels.” It defies logic that anyone could produce anything of merit in that quantity. Even the best American novelists such as Steinbeck and Hemingway ran out of ideas and energy, writing some stinkers to pay the rent.

Every month, over at Bookviews.com, I post a report about new books. It averages about 70 titles, fiction and non-fiction. That’s nearly 850 books a year and I guarantee you they are the best of the lot of the approximately 1,800 I receive.

I recommend you visit. It will astound you.

—Alan Caruba’s weekly commentaries are posted on the website of The National Anxiety Center and are widely disseminated on the Internet. He also has a daily blog called Warning Signs. Love to read? Visit his monthly report on the best in new fiction and non-fiction at Bookviews.com.