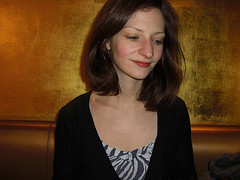 NBCC member Lauren Elkin, a PhD candidate at the Graduate Center CUNY and the Université de Paris VII, sent us this dispatch from Tokyo, about what she is reading while primarily based in Paris:

Marcel Proust, Du côté de chez Swann (1913). I'm just beginning to prepare for my PhD orals, which are in May, so this will determine what I'm reading in large part between now and then. This month I'm working on my French “modernism” list, which covers 1890-1950. I have the whole Recherche on my list– I've never read past the first few chapters of the first volume! So this is a good excuse to take a few months and get through as much as I can. The problem is, honor demands that I read it in French, which makes for slower going than if I read it in translation…

Andre Gide, Paludes (1895). Best known for being a satiric send-up of fin-de-siècle Parisian literary circles, in particular the Symbolists, who gathered in Stéphane Mallarmé's salon every Tuesday, Paludes is an early example of the kind of meta-reflexion on novel-writing that Gide would later exert on a grander scale in Les Faux-Monnayeurs (1925). The novel consists of a series of scenes in which the narrator, a double for Gide, tells his friends about the novel he's writing, Paludes; from time to time excerpts from the novel-within-the-novel are included in the novel-around-the-novel.

Eugen Weber, The Hollow Years (1994). A history of France in the 1930s that looks at the period leading up to the Second World War– from the lingering “psychic wounds” of the First World War to the “economic woes” of the period and France's immigration policies. The resonances between France in the 1930s and France today are morbidly amusing– for example, Weber explains that most bureaucratic jobs were held at that point by veterans or widows of the First World War, and “their incapacities, their bitterness, or simply their ill humor would color public life and make human relations more snippy and contentious”. One wonders what, in the absence of a recent World War, is the excuse for today's French bureaucratic snippiness and contentiousness.