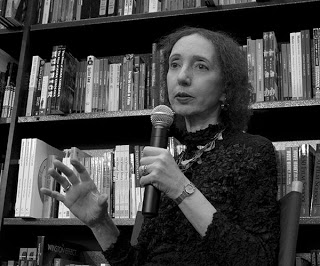 LAST night at Barnes & Noble in Tribeca poet Lawrence Joseph interviewed the recently twice-nominated Joyce Carol Oates about The Journals of Joyce Carol Oates, 1972-1983. It was a fascinating, warm, often very funny conversation conducted before a crowd of about 110 people. Joseph, an active journal writer himself and something of a conossieur of the form (references were made to the journals of Kafka, while Oates mentioned Anais Nin, who apparently began writing her journal after her father left the family ‘so that he could know what had been going on in her life.’ She never stopped).
Some of the questions which arose were—who is the audience of a journal? Why keep one as a writer if so much of the act of writing is revising (Oates did not revise these journals, which is truly astonishing if one reads them, so beautiful is some of the writing)? Asked why she did not reread the journals Oates responded that it was often too painful to do so, since (and I’m paraphrasing) many of the people in them were being written of with such familiarity and yet they are no longer alive. ‘We have such finite time and we take so many people for granted,’ Oates said.
Among the figures that appear in the journal, in addition to members of Oates close family, are Susan Sontag, Stanley Kunitz, Stanley Elkin, and John Cheever. Joseph, who knew Oates in Detroit, where she lived and he was born, does not appear but Oates assured him he appears in later journals. Asked if last night’s event would change how she wrote in her journal Oates said flatly, no, that when writing she thinks of the problem at hand and nothing else matters.
The photograph with this post was kindly provided by Gaetano Catelli, who shot the event