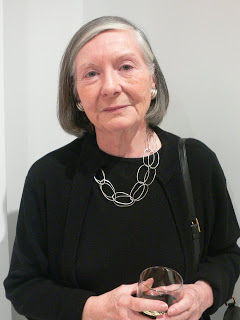 The NBCC will post periodic updates from finalists and winners of our book prizes about what they are working on (or about to publish) now. The following comes from Maureen Howard, who won the National Book Critics Circle Award for general nonfiction in 1978 for “Facts of Life.” She is currently working on the last of her seasonal novels.

Let me tell you about my novel. I wish the scene were the old Westside, Broadway and 114th, that we’d tossed back a few, but I’m simply here at home writing the last of my four seasons. This work, progressing, is to be titled The Rags of Time. They are the final words of a sonnet by John Donne: Love all alike, no season, humor or clime/Nor hours, days, months, which are the rags of time. And it is with such tracking of my time that I began to write a work of fiction and fact that was published ten years ago, A Writer’s Almanac. Twelve years ago, if I allow for writing time which I must, given that I am almost always at home each day braiding the next rag into the rug, a cottage industry.

This time, this last time, I’m concerned with the clock running, the passing days of here and now. I am dating each entry of my almanacy fiction, working ahead as we all must to get to the end of our story. I have the good fortune to live across from Central Park (The Greensward, as their wondrous plan was called when by Frederick Law Olmsted and Calvin Vaux submitted it to the Park Commission,1858). The view from my window and from my walks round the Reservoir, is there for the snapshot, more often it must be landscaped. Isn’t that how we write novels?—each scene as carefully arranged as the placement of The Lake just below Bethesda Terrace. I trust my plots are arranged like the plotted wild of The Ramble once considered a territory of danger, and that my characters, from Columbus to a failed mathematician to a foundation executive to myself, I suppose, are no more endangered than the old elms that line the Mall. Loving all alike, the novel welcomes family stories; tales of war and since I live in a house with the presumptuous name of El Dorado built in l929, stories of oil and gold. And of survival.

I have my troupe. Having, in my youth, collected prints of clowns, acrobats, comedia del’arte figures, I bring some of my characters on again from previous seasons. Are they forever set in their roles or do they gain dimension? Cartoon to panorama: I’ve written an entry in the novel for the days—All Saints, All Souls—in which the book is seen, politically and personally, as a worn tapestry hung in a ruined castle of faith meant to keep out the cold.

—Maureen Howard is the author of eight novels, three of which (Grace Abounding, Expensive Habits, and Natural History) were finalists for the PEN/Faulkner Award. Her 1978 memoir, The Facts of Life, was the winner of the National Book Critics Circle Award. The recipient of an Academy Award in Literature from the American Academy of Arts and Letters, she lives in New York City.