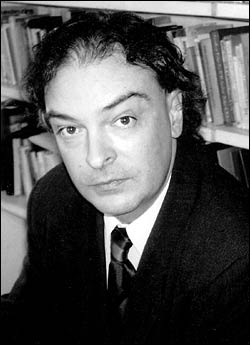 LAST week, the NBCC launched a Best Recommended List, drawn from the votes of our members and over a hundred former finalists and winners of our award. (For more on that scroll down to the list, or go here). One of the voters was Scott Esposito, editor of the Quarterly Conversation and the blog, Conversational Reading. Here's what he had to say about his vote (you can read the complete description in a recent essay by Scott at the Quarterly Converation):

“In these seemingly anti-literary times, authors tend to do all they can to support literature; Spanish novelist Enrique Vila-Matas (pictured above) is the first I've seen to treat it like a disease. That's not to say, however, that he isn't supporting the literary in his own way; rather, it's just that Vila-Matas's way of pushing the medium forward is by contemplating whether or not we're going though a period of literary parasitism because mostly everything Western literature has to utter has been said. Befitting an author who entertains the notion that contemporary literature amounts to scribbling in the margins of the great works, Vila-Matas seems to be pioneering a strange new genre: the literary essay as novel. The first two of his books to appear in English, Bartleby & Co. and Montano's Malady, are fine examples. Both translated by Jonathan Dunne and recently published in paperback by New Directions, these books, as any well-written essay might be, are positively saturated with quotes, references, glosses, and other signs of deep research; what's more, the obvious scrupulousness (even exhaustiveness) with which Vila-Matas has looked into his subject matter seems more appropriate to a critical work than a novel. At a time when more and more novels are including lists of sources and footnotes, Vila-Matas's books stand out both for their rigor and for making their sources an integral part of the text. In these books, Vila-Matas is grappling with the act of literary creation, and in the process he obsessively stares up at the works of his predecessors. These two novels are very consciously written from under the shadow of literature; they are not only aware of the debts they owe to great authors—Kafka, Musil, Beckett, Gide, and Robert Walser among them—but they seem to be written desperately, as if the great works make their own existence virtually impossible. It may be that Vila-Matas is doing parasitical work, is simply filling in the gaps, but if so then his novels belie the received wisdom that parasitism is always bad and filling in the gaps dull.

As it is in these novels, it can be far more interesting and far more original most of what it currently being published.”

—Scott Esposito is a member of the National Book Critics Circle. His reviews, essays, and interviews have been published in the San Francisco Chronicle, The Philadelphia Inquirer, The Chattahoochee Review, the Rain Taxi Review of Books, and Boldtype, among others. He also edits the online quarterly The Quarterly Conversation.