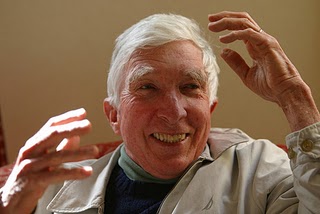 WYATT MASON has been absorbing all the discussion about reviews and reviewing from the sidelines for some time now, and he steps up with some questions about the self-flagellation of critics over the generations in this new piece in the December Harper's. Mostly, the former Balakian winner would like to know what it truly means to think, and to read more thoroughly:

“What criticism might practically entail—what tactics, what techniques, what fine tools—is left unelaborated except in the most amorphous (to care, to think) terms. And so, when Zadie Smith tells us, in her own recent 8,000-word manifesto on these matters, “What I am imagining is, I hope, a far more thorough reader,” what is one left to suppose but that the true critic, like a unicorn or a yeti, must reside in the imagination?”

A recent trip to a bookshop in Manchester-by-the-Sea, Mass however answered his question — or at least allowed him the chance to peer over the shoulder of a reader reading thoroughly. Here, Updike fans might already know, is the bookshop which bought up John Updike's massive quantity of reviewing copies, complete with his marginalia.

“Thus, you can sit on a couch in the store and open (until it sells, of course) Updike’s copy of Tom Wolfe’s A Man in Full. A penciled “ugh” greets the reader in the margin of page 12 adjoining the line “Inman was shaking his head so hard his jowls were lagging behind his chin and flopping around.” On the same page, the pencil pinpoints the phrase “an extraordinary pounding,” and then notes, supra, “clichés—a semi cliché in every sentence.” Yet that same reader’s pencil, so peeved so soon, does not fail to fit a “good” onto page 531 beside a description (“He surveyed the tiny red eyes and all the mangy faces looking at him”); or, on page 552, to tag a sartorial catalogue of some length with a “beautiful.” And in Updike’s galley of Gain, by Richard Powers, one notes a ballpoint-penned “awful” pinned to the phrase: “For over a century, Clare laid countless clutches of eggs whose gold only the niggling would stoop to assay”; whereas, nearby, a passage of reportage earns an approving “what a trick!,” and an epigram soon thereafter—“Funerals are for the living, to punish them for all that they’ve failed to do for the dead”—nets a tidy “ha.” A peppering of “ha”s, in fact, in pencil and various tints of pen, season the once-bland margins of many of Updike’s uncorrected proofs; Norman Rush’s Mortals, say, in which its 700-plus pages are stung with spidery tattoos—“graceless sentence,” “good,” “run on,” “good,” “a talky style,” “‘angel-tits,’ cloying,” “‘worse for war’—pun!,” “do we need this?,” “dithering,” “is this too blunt or excellent?”—not to say corrections, even to the novel’s final page, where a forgotten “in” has been planted with a caret. “

There's more to this than just a curio for collectors, Mason observes:

“To peruse copies of books that Updike read with the intention of reviewing—including Michael Ondaatje’s Anil’s Ghost; Alice Munro’s Selected Stories; Margaret Atwood’s The Blind Assassin; Barry Hannah’s Geronimo Rex; and many others—is to meet a reader who, in a most inarguable way, is a picture of thoroughness. The margins run with comments, even in appendices, even by footnotes. “I read slower than I write,” Updike wrote, rather amazingly, in 1975, suggesting that these annotative efforts represent a substantial investment of time. If criticism is, as Terry Eagleton has said, a way of “looking at meaning not as an object but as a practice,” then one can see in Updike’s review copies the humble, rudimentary motions of that practice. As often as not, his marginalia may be seen doing one of the most immediate jobs of criticism, which is to distinguish, however arbitrarily, good things from bad. And yet, in the main, Updike may be spied undertaking a more considered task: that of interrogation. The form of punctuation that predominates in his margins is the question mark. What one is witness to is a patient reader’s private conversation with a book.”

It's a terrific piece, not just because it gets into the nitty-gritty, the specifics, of what makes for good criticism, while making some fine observations about the kind of reviewing Updike has been doing for forty years: the piece also mimics the form. Here is a critic, whose job it is to write in the margins, writing in the margins (i.e., reviewing) a book by looking at it as a kind of primal way of reading. On top of that, you can look through a gallery of Updike's marginalia here. If this gets you curious, track down a copy of H.J. Jackson's “Marginalia,” an NBCC finalist of some years back, which has all kinds of interesting ideas about what causes readers and writers to hug the shore of a book's margins with their pencils at the ready.