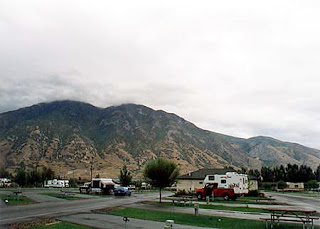 The following poem from National Book Critics Circle winning poet Mark Rudman kicks off the In Retrospect series look at Norman Mailer's 1979 finalist, The Executioner's Song. The poem, which Rudman sent to us this weekend, explaining it was written in dialogue with Mailer's book, originally appeared in the London Review of Books, and is posted here with grateful permission of the author.

It’s hard to get anywhere in Utah without going through Provo.
I can’t tell you the number of times
I went there as a teenager, the number
Of times I drove into town in the early
Afternoon, hungry, and had to look around
For a place to eat. You don’t have to starve
In Provo but you eat at your own risk.
At no risk. I would never have gone to Provo
On my own. I went accompanied–
For reasons almost too trivial–or personal–to mention.

There are moments when you simply must get into the car and drive
And from Salt Lake there are only a few ways to go,
Toward the Great Salt Lake or toward the canyons and to get
To Zion or Moab you had to pass through Provo.

I remember the population because it went
With the number of miles from outskirt to outskirt,
45 miles, 45,000 people, 45 minutes
(Keeping to the speed limit)
$45 to spend on a suit at a 45% discount….

There was nothing Provo’s department store did not carry,
Including pearl handled Colt 45’s,
But for a wider selection of fire arms, rifles
With narrowing focal points, with greater precision over vast
distances,
You were better off
Next door.

O I guess it wasn’t that different from entering
A thousand other American towns, but this one
Made my flesh crawl. I wanted to howl.