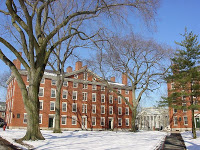 This week the NBCC has been focusing our In Retrospect serieson W. Jackson Bate's “Samuel Johnson,” which won our award for general nonfiction in 1977. The following remembrance of Bate as a teacher comes to us from Margaret Heilbrun, social sciences editor of Library Journal.

I was an undergraduate at Harvard from 1975 to 1979, in time to takeJackson Bate’s famous course, “The Age of Johnson.” I believe at the time that the course was offered only every other year; as a sophomore, not majoring in English, I happily joined the crowds and have been imbued by Bate’s lectures ever since.

Here was the magic:

Bate conjured a topic, unafraid to show that it still moved him. Therefore, his words, spoken with unabashed twinges of emotion as particular phrases still caught at him, entranced his audience as well. We found ourselves lurking, for example, in the rain at Uttoxeter market square on a day about 200 years earlier, as a man stood, head-bowed, unhatted, serving solitary penance for a remembered and regretted disobedience to his father who’d had a failing bookstall there fifty years before and had been in need of his son’s help.

Prof. Bate always knew how to festoon his lectures with seemingly small bits that in fact evoked for us the entire personage of Johnson. As the course progressed, these bits accrued into an abundance of Johnsonian visions and treasures. We never questioned whether they represented any sort of subjective integrity; they had been magically proffered to us and we accepted them.

I went on to handle some of these bits with less elegance than Bate, for example, reminding a professor (or teaching fellow, this being Harvard) in my blue book during my senior year exams that, according to Johnson, an essay — even if a Harvard exam essay! — was merely “a loose sally of the mind,” and could hardly be expected to be a polished, finished product! I still recommend recourse to Johnson’s definition to those who may find themselves similarly strapped.

Another bit of magic? Unlike the majority of Harvard professors whom I encountered, Prof. Bate gave full lecture assignments (and not mere section or grading assignments) to his teaching fellows. He allowed a graduate student to teach us about Goldmith, for example. While we missed his own particular élan, we appreciated his generosity and lack of territoriality.

One of Johnson’s observations that Bate much liked, and repeated, wasJohnson’s noting of “the triumph of hope over experience” (Johnson said it in regard to an older woman getting remarried). Bate chose, I think, the very expressions that he knew might serve callow students well and even aid them in growing wiser, as they may have aided him when he first had come upon them. He wasn’t simply teaching us Johnson’s life, works, and circle of friends; he was teaching us a kind of philosophy with each of these deceptively simple phrases.

He did not teach us about Johnson really in any way that approached his biography, published in the year in which I took his course. I was, in fact, quite astonished at the difference between that book and his lectures. I found I preferred the lectures because I figured that they distilled Johnson and his world down to what had meant the most to Jackson Bate. The lectures to us did not carry the same heavy obligations to the academic community at large. I preferred (and prefer) my Johnson without psychoanalytical analysis, lit-crit Luddite though that may brand me. Prof. Bate, in his class, quoted Carlyle– not Freud — from that man’s essay on Boswell’s Life of Johnson, and I have remembered Carlyle’s words in Bate’s voice ever since:

“Rough Samuel and sleek, wheedling James were and are not. Their Life and whole personal Environment has melted into air. The Mitre Tavern still stands in Fleet Street, but where now is its scot-and-lot paying, beef-and-ale loving, cocked-hatted, pot-bellied landlord…. Gone! Gone! The becking waiter who with wreathed smiles was wont to spread for Samuel and Bozzie their supper of the gods, has long-since pocketed his last sixpence and vanished, sixpences and all, like a ghost at cock-crowing.”

But the sixpences aren’t vanished. Many of us have one of them in our pockets. We caught them in the air from Jackson Bate, as he lectured and tossed them forth. We still reach into our pockets now, we feel that old piece of metal, and are happy.