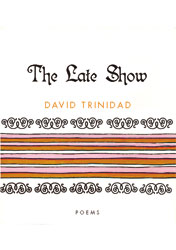 Three moves and a two-month trip in under one calendar year mean all my favorite books have been in storage for 9 months–but my shelves are lined with shiny (or inexplicably battered) review copies. Since I can't read my Vanity Fair or A Ring of Endless Light for the 18th time, here's the next 5 books I'm looking very forward to reading (and re-reading):

1. The Late Show, David Trinidad (Turtle Point Press)
I'm not certain where I first discovered David Trinidad, but I'm pretty sure it at Chelsea's A Different Light bookstore, where I picked up Hand Over Heart and Answer Song, two books that have survived numerous moves and purgings, while waiting for a garage to fix my tire. Though nowadays, mixing pop culture and poetics has passed from ubiquitous to obligatory–find a new book of poetry without one mention of a sugary breakfast cereal or an insipid television series–works like the pantoum “Movin' With Nancy” or the sestina “Playing With Dolls” (reprinted here on McSweeney's Internet Tendency) remind you why anyone did it in the first place.

2. The Great Man, Kate Christensen (Doubleday)
My dear friend Maud Newton and I agree on nothing where books are concerned–she's Borges to my Babbitt. (Barbecue, greens and sweet tea, we're on the same page.) This summer, she insisted I start reading Kate Christensen, about whom I know absolutely nothing. I have high hopes, especially since–is this a ploy?–the book's dedication reads simply “To Lizzie.”

3. Ace of Spades, David Matthews (Henry Holt)
All of my hard-core Charm City friends have already filed this autobiography–of a half-black, half-Jewish Baltimorian growing up during the city's jagged split along racial lines in the 1970s–alongside their Wire CDs. When a book begins “God knows why, …” you do want to find out.

4. Leonard Michaels: The Collected Stories (FSG)
At the age of 13 I was in possession of one of the Nachman books–Nachman in Los Angeles?–and I read it and didn't understand it at all, if Mona Simpson's “sexually kinetic” tag is to be believed. I hope time will afford me more clarity.

5. Down There On a Visit, Christopher Isherwood (Metheun)
I arrived in Berlin and realized that something I had been meaning to bring along–Isherwood'sBerlin Stories–was still in storage. But at the end of the trip, I was lucky enough to find a first edition of a reprint of Down There on a Visit in Amsterdam for only 13 Euro, or $587. A brief preface, presumably the author's, explains, “Down There refers to that nether world within the individual which is the place of loneliness, alienation and hatred.” November.