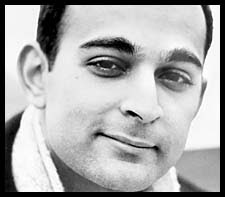 NEXT WEEK, Harcourt will publish Mohsin Hamid's second novel, “The Reluctant Fundamentalist,” a brisk rewriting of Albert Camus' “The Fall” (1957) for modern times. Only in this case, the two participants are not a Frenchman and a passerby in an Amsterdam bar, but a Pakistani man named Changez and an unnamed, offstage American sitting at a cafe in Lahore, Pakistan.

Over the course of a long afternoon, the Pakistani man unspools his life story to his silent listener, who may or may not be a CIA operative come to assisinate him. It is a Gatsbyesque tale — of moving to America to attend Princeton, of working his way into the heart of America's finance world, then suddenly realizing he had become a “janissary” against his own native culture. In the end, he becomes a reluctant fundamentalist.

I spoke to Hamid in February as he passed through town for the final deliberations for the B&N Discovery Prize (he was a judge). Here is what he had to say about Albert Camus, morality, and how both influenced his east-meets-west tale.

Q: One book I couldn’t get out of my head while I was reading this book was The Fall by Camus – I found it very interesting that was published exactly 50 years ago – the morals at the crux of that book's conversation were much more local. Here we’re looking at something far more globalized: the sense of virtue, at least in our time, has become so much more stretched across national borders. So a Pakistani-American who works in the corporate world and worries if he’s betraying his country isn’t the only one who has to think about Changez’s dilemma: everyone does.

A: The Fall is very clearly a model for this novel – both in the first sentence, and throughout the book I try to acknowledge Jean-Baptiste (who is present in the Chilean publisher who Changez meets later in the book), it’s something I did very consciously. In 1957 this idea of trying to break down the individual, and debunk the notion of us being good – something literature and the world has done very successfully – was quite radical. Now no one goes around thinking the individual is good; we're all tarnished. If you look behind anyone you find all sorts of stuff. What’s surprising given that, is that notions of larger collectives haven’t been debunked as thoroughly. We indulge ourselves in larger narratives that remain fundamentally good. Somehow, there is an emotional tribal feeling that remains. And that tribal feeling is actually particularly encouraged in America, as the only victor of the Second World War still standing. And in the Muslim world, it’s a sense of decadence and decline and impotence, which causes people to reach out for a similar type of decadence.

Q: Americans who grew up inside the country don’t feel the failures of the nation state as much as people from other post-colonial states: even though the state could be said to be failing them. One of the largest differences between '57 and now then is that so many states which have got their independence have failed. And so, of course when people from east and west sit down to talk to one another they miscommunicate. In fact, the American doesn't speak at all.

A: Actually, the novel stands up as the reverse of what American media gives everybody all the time. Which is – these guys don’t say anything. They are the grainy picture which stands for 30 seconds before the bomb hits and blows up whatever building that is. Who knows what they were saying inside that building? We don’t really care. So the novel is a way of reversing that. Who knows what the American is saying?

Camus tried to implicate his reader in the moral decline of his novel; he had in mind as a reader this French intellectual, an insider, who was very much aware of the literary tradition. Rejecting Camus or pushing him away. In my novel, there is also an attempt to fundamentally implicate the reader. So if you view the world as fundamentally as a world where there is a war between civilizations, then the novel is a thriller. If you don’t, it equally is a random encounter between two separate guys who go their separate ways. So if it’s a thriller or not depends on the preconceptions we bring to it as readers. Since almost all the encounters of our planet are of the second kind, and yet we’re so willing to read into them this sense of threat and menace. That was the kind of implication I wanted to make of the reader.

Q: Did you move to the U.S. to go to Princeton like Changez?

A: Yeah, I was here for Princeton and Harvard and then worked in New York. But I also spent six years of my childhood when my dad was doing his Ph.D. at Stanford. So I literally have lived – not quite half – but close to half of my life in the United States. So I feel quite American, so if not American, then as American as I am Pakistani.

Q: Do you have three passports?

A: No, I just have a Pakistani passport and a British passport. So when I show up at immigration I am not an American at all, as far as immigration officers are concerned – but that’s just a very silly way of defining what an American is. I feel like an insider here, as well as an outsider, as I do feel in Pakistan. But to answer an earlier question of yours, I hope [“The Reluctant Fundamentalist”] plays better inside as it does outsider. The novel is not meant to be an exercise in America-bashing – it’s what happens if you’re in love with two different things: sort of the Muslim on Pakistan on one hand, and the U.S.A on the other hand, which in my case is symbolized by the U.S. of Underwood Samson and [Changez's love interest] Erica: my character is in love with them both.

Q: What brought Erica into the story?

A: Well, the novel in the beginning was a love story. The first draft of the novel was about a love that doesn’t work out.

Q: Which is sort of true still..

A: Yes, it's exactly true. For me, the personal and the political are very much intertwined things. So a love story that doesn’t work out and this political story are the same story. It's not the story of someone who begins hating something. It's somebody who loves something so much that they are willing to do things which, upon reflection, when their love is rejected, feels demeaning.