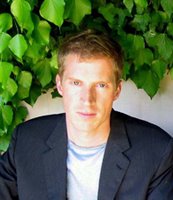 As part of our efforts to uncover The Rest of The Best, we've been contacting the judges to ask what they voted for, and why. Here's Andrew Sean Greer:

“One thing to keep in mind: we didn't all meet together or anything. I didn't get to see John tussling with Mary Karr. Also: we're writers, not critics, and so what we're going to pick is going to be very personal. Writers mostly read books that inspire them to write, after all, so while a book may be remarkable, it may just not help out, and so it's put aside. That's what I finally came to in making my choice–Michael Chabon's The Amazing Adventures of Kavalier and Clay–because that book got me so excited about the pleasures of reading that I started on my next novel with joy instead of dread. I wasn't the only one. That may not be a great answer, but as I said, I suspect most of us picked the things we loved the most.

I think we all knew, on seeing the question, that Beloved would win. It has a firm place in the canon, a Nobel Prize, and was a highly influential book. And I think Roth was an obvious one, as well, though his is a more European career, a series of novels in conversation with one another, and doesn't lend itself to this particular parlor game. Let me put in that I'm a great fan of Updike, as well. I know that isn't popular, for some reason, but he is a magnificent writer and–a dying breed–a man of letters. So maybe some of us thought, Okay, let me see what else I can put on the list. Not Morrison, Roth or Updike. Someone else who has meant something to fiction in the last few decades. Maybe someone under 50 for God's sake? And for many young writers, it's Michael Chabon. It may well be that the future of the novel lies in the mixing of genre and literary pleasures, and he literally wrote the manifesto on that (in his McSweeney's collection). And wrote the book to prove it.”