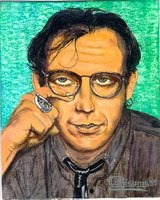 As part of our efforts to uncover The Rest of The Best, we've been contacting the judges to ask what they voted for, and why. Here's Madison Smartt Bell:

“I was happy to be included — sincerely happy– but I didn't put much stock in the project itself. I think they asked us all to send in a list of ten best books since a certain date. Mine included Merry Menby Carolyn Chute, Continental Drift by Russell Banks, Damascus Gate by Robert Stone, Blood Meridian by Cormac McCarthy, and probably some title by William Vollmann and Mary Gaitskill, also maybe 1982 Janine by Alasdair Grey and … pretty fuzzy, right?

I missed the NYT issue by being in Haiti at the time but I gather that the main result is an utter lack of consensus…. which I find rather cheering in fact, for it suggests that there is more diversity of taste AND talent out there than we are generally inclined to think.”