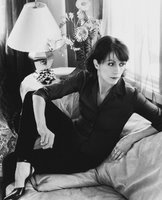 As part of our efforts to uncover The Rest of The Best, we've been contacting the judges to ask what they voted for, and why. Here's Mary Karr, who we spoke with via telephone:

“People often say, Oh a book's great because of its roots and its history … I don't really give a shit about that. And I don't think the primary value of a book is idea or form — it's feeling. It's such a corny thing, but for me the real yardstick is, does it make me feel, do I re-read it, and does it reward study. I have a copy of Blood Meridian I've read every year for about 11 years. I find it terrifying, and even though most of the characters are pretty despicable, I love them — I can't live without the characters. It's like having a crush on somebody and stalking them. Like you're standing outside the window of that book with your boombox on your shoulder waiting, playing love songs and hoping they'll come out again.

About the list, I'm always astonished by the devotion to Updike. I think it's just from seeing his name in the New Yorker so relentlessly. I mean, no writer I know really values those books except the first one, “Rabbit Run,” which I think is terrific. After that it became dilution. He certainly does make immaculate sentences, but so did Upton Sinclair and Sinclair Lewis, two mediocre novelists who are not a patch on Hemingway or Fitzgerald or Ralph Ellison.

And the abundance of Roth on there? The fact that they couldn't settle on one of his books almost tells you there's something wrong. Everybody has an idea that he's a great writer, but nobody can pick his best one, maybe two books? Everybody I know reads DeLillo and no one would disagree that “White Noise” and “Underworld” are his best books, hands down. So there's something about the scattershot of all those Roth books, it makes me mistrust it, makes me think it's about the author and not the book.

But I think lists like this are important to make because they cause people to have conversations about what is and isn't of value. In that sense I think it's really crucial, because otherwise all you've got in the marketplace are the critics, and the people who are actually writing don't have much of a voice. As somebody who cares about books, I think doing this kind of thing is good. You know, if it sparks conversation, it doesn't really matter what books you pick.”