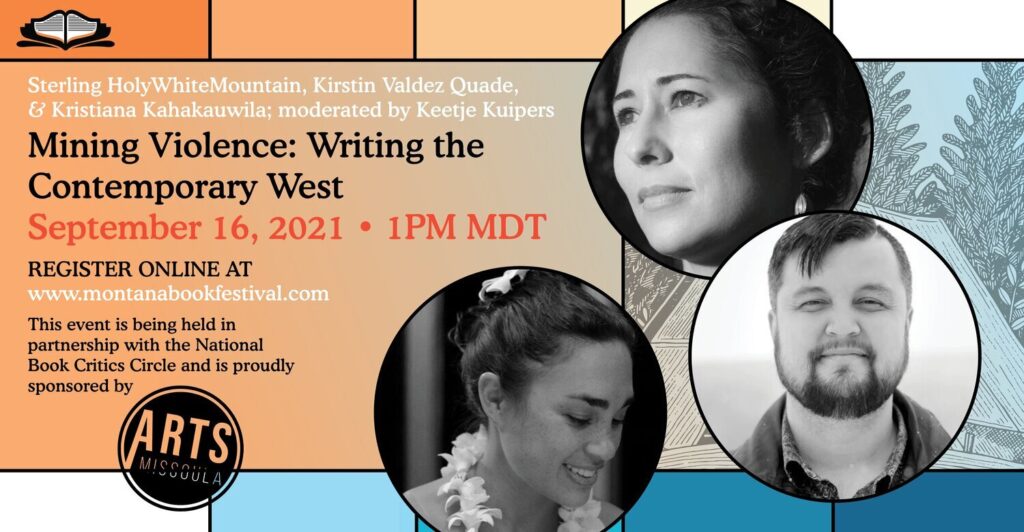 The Montana Book Festival and the National Book Critics Circle are hosting a conversation with Sterling HolyWhiteMountain, Kirstin Valdez Quade, and Kristiana Kahakauwila about how the history (read: violence) of the American West is mined in order to write contemporary literature toward and about the region today. NBCC board member and poet Keetje Kuipers will moderate.

Register for this virtual event here.

This event is proudly sponsored by Arts Missoula and will be recorded by Missoula Access Community Television as part of a Media Assistance Grant donated to the Montana Book Festival by MCAT.

Sterling HolyWhiteMountain grew up on the Blackfeet Reservation, in Montana. He is a Jones Lecturer at Stanford University.

Kirstin Valdez Quade is the author of The Five Wounds (W. W. Norton, April 2021). Her story collection, Night at the Fiestas (W. W. Norton, 2015), won the John Leonard Prize from the National Book Critics Circle, the Sue Kaufman Prize for First Fiction from the American Academy of Arts and Letters, a “5 Under 35” award from the National Book Foundation, and was a finalist for the New York Public Library Young Lions Award. It was named a New York Times Notable Book and a best book of 2015 by the San Francisco Chronicle and the American Library Association. Kirstin is the recipient of the John Guare Writer’s Fund Rome Prize from the American Academy in Rome, a Rona Jaffe Foundation Writer’s Award, a grant from the Elizabeth George Foundation, and a Stegner Fellowship at Stanford. Her work has appeared in The New Yorker, The Best American Short Stories, The O. Henry Prize Stories, The New York Times, and elsewhere. She is an assistant professor at Princeton.

Kristiana Kahakauwila is a hapa writer of kanaka maoli (Native Hawaiian), German and Norwegian descent. Her first book, This is Paradise: Stories (Hogarth, 2013), takes as its heart the people and landscapes of contemporary Hawai’i and was named a 2013 Barnes & Noble Discover Great New Writers selection.