As we dig our way out of the empty champagne bottles and dried-up pine needles, our trenches of galleys remain. Here’s to a new year of new books and engaging dialogue.

First, though, let’s tie up a couple loose ends from 2022 for our double post-holiday edition.

For Kirkus Reviews, former board member Tom Beer wrote about his year-end reading, including The Escape Artist: The Man Who Broke Out of Auschwitz To Warn the World by Jonathan Freedland and Mr. B: George Balanchine’s 20th Century by Jennifer Homans.

And last but not least, we’re excited to share the results of last month’s NBCC board election. New and returning board members include Jacob M. Appel, Colette Bancroft, Jane Ciabattari, Lauren LeBlanc, Marie Myung-Ok Lee, J. Howard Rosier, Michael Schaub, and David Woo. Congrats to all, and thanks to all who ran and voted in the election. 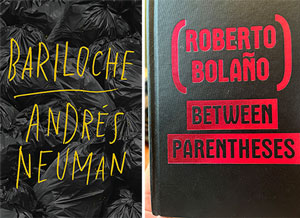 Bariloche, the debut novel from Andrés Neuman and the author’s latest in translation from Robin Myers, begins with a prologue by Roberto Bolaño that previously appeared in Bolaño’s posthumous collection Between Parentheses.

While editing Publishers Weekly’s review of Bariloche, I was tickled to find I’d marked up Bolaño’s appreciation of Neuman when I read it 12 years ago. Long may we live in the “dream of great literature.”

George De Stefano reviewed Ain’t But a Few of Us: Black Music Writers Tell Their Story, edited by Willard Jenkins, for the New York Journal of Books:

Marion Winik reviewed The Easy Life by Marguerite Duras for the Washington Post.

Nell Beram reviewed The Lemon by S.E. Boyd and No One Left to Come Looking for You by Sam Lipsyte for Shelf Awareness.

Jim Schley reviewed Peter Orner’s Still No Word from You for Seven Days.

Frank Freeman reviewed Reflections of a Nonpolitical Man and The Magic Mountain by Thomas Mann for America Magazine and His Masterly Pen: A Biography of Jefferson the Writer by Fred Kaplan for Maine Sunday Telegram.

Linda Hitchcock reviewed The Seamstress of Sardinia by Bianca Pitzorno for BookTrib.

The NBCC’s VP/Events Jane Ciabattari talked with Rae Meadows about her new novel, Winterland, set in the golden age of Soviet gymnastics, for Lit Hub.

For Alta, David Ulin interviews Isabel Allende and looks back at her first novel, House of the Spirits.

Kevin Brown reviewed Stendhal’s Red and Black: A Chronicle of 1830 for Rain Taxi.

Paul Wilner interviewed Emil DeAndreis about his new novel, Tell Us When To Go, for the Nob Hill Gazette.

NBCC board member Lori Feathers and Sam Jordison talked with Cristina Rivera Garza on the Across the Pond podcast about Rivera Garza’s New and Selected Short Stories.

Jim Ruland’s Corporate Rock Sucks: The Rise & Fall of SST Records was named a best book of 2022 by Pitchfork and Vanity Fair.

Roberto Garcia’s What Can I Tell You? Selected Poems is out now from Flowersong Press, and was featured in a list of collections by Latinx and Caribbean writers at Electric Lit.


SEND US YOUR STUFF: To have your work featured in the weekly Critical Notes, please join the NBCC.