TONS of reviews, interviews, and pieces of good news from our members to report this week. As always, thanks for sharing and reading!! 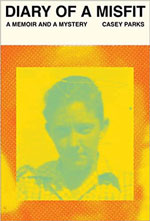 Diary of a Misfit: A Memoir and a Mystery by Casey Parks

Parks, a reporter at The Washington Post, earned a starred review from Publishers Weekly for this “tantalizing blend of personal history and reportage,” which recounts the author’s efforts to “seek out the story of an enigmatic small-town country singer” and “reckon with her own fraught past.” The New York Times Book Reviewdescribed the book as “at once dewy-eyed and diligent, capricious and capacious, empathetic and exacting.”

Our reviewers agreed. Robert Allen Papinchak, writing in The Oregonian, compared reading the book to “assembling a double-sided jigsaw puzzle”: “sometimes maddening, sometimes exhilarating, ultimately rewarding.” Meanwhile, in The Boston Globe, Lauren LeBlanc hailed it as “an immersive, expansive look at the world of small-town life” in the Deep South as well as “a loving and unflinching portrait of a search for community.”

NBCC board member J. Howard Rosier reviewed Carlos Manuel Álvarez’s The Tribe: Portraits of Cuba, translated from the Spanish by Frank Wynne with Rahul Bery, for Words Without Borders.

Former NBCC Emerging Critic Natalia Holtzman reviewed the novel An Evening of Romantic Lovemaking by Ben Slotky for On The Seawall.

Edna Bonhomme reviewed Farrah Jasmine Griffin’s Read Until You Understand: The Profound Wisdom of Black Life and Literature for The Nation.

Kathryn Ma reviewed Jamie Ford’s The Many Daughters of Afong Moy and Margo Candela’s The Neapolitan Sisters, both for the San Francisco Chronicle.

Heather Green reviewed Coral Bracho’s It Must Be a Misunderstanding, translated from the Spanish by Forrest Gander; Nina Mingya Powles’s Magnolia; and Lisa Robertson’s Boat, all for the Poetry Foundation’s Harriet Books.

Betsy Groban wrote about the reopening of the Emily Dickinson House in Amherst, MA, for the travel section of The Boston Globe.

Dana Wilde reviewed Gillian Burnes’s novel about a public radio reporter, Soft Features, in his “Off Radar” column for the Central Maine Newspapers.

W. Scott Olsen reviewed Course of the Empire by Ken Light and Seeing Light: The Beauty of the World’s Most Quiet Places by Pete McBride, both for Frames Magazine.

Nell Beram reviewed Alice Sedgwick Wohl’s As It Turns Out: Thinking About Edie and Andy and Rebecca Woolf’s All of This: A Memoir of Death and Desire, both for Shelf Awareness.

Cassandra Whitaker reviewed Gretchen Felker-Martin’s Manhunt through the lens of Hil Malatino’s Side Affects: Being Trans and Feeling Bad for beestung.

Former NBCC Emerging Critic Natalia Holtzman interviewed Sarah Thankam Mathews about her debut novel, All This Could Be Different, for the August cover of Kirkus Reviews.

Martha Anne Toll interviewed Michael Bourne about his debut novel, Blithedale Canyon, “an inside look at mid-life love and the slow crawl out of addiction,” for Bloom Magazine.

Theodore Kinni interviewed Roger Martin about his book A New Way to Think: Your Guide to Superior Management Effectiveness for strategy+business.

With the support of a grant from the National Endowment for the Humanities, former NBCC treasurer and autobiography finalist Rigoberto González will be editing Latino Poetry: A New Anthology for the Library of America. The volume is the centerpiece of a new public humanities initiative on Latino Poetry planned for 2024-25, with events to be held across the country.

Hélène Cardona participated in the first of a series of three bilingual readings for Women in Translation sponsored by PEN America, presenting her translations of Hungarian poet Lea Nagy.

Lydia Pyne’s new book, Endlings: Fables for the Anthropocene, has just been published by the University of Minnesota Press.

Two screenplays co-written by Mary Mackey and Renee De Palma have been nominated for the City of Angels Women’s Film Festival Awards in the Written Words category: Lady Danger for Full Feature Screenplay and Time Piece for Short Film Script.

Kevin Blankinship helped create a choir concerto based on eleventh-century poet, freethinker, and alleged Muslim heretic al-Ma’arri’s book Self-Imposed Necessity. You can read more about the project and listen to a sample recording here.

SEND US YOUR STUFF: To have your work featured in the weekly Critical Notes, please join the NBCC or renew your membership. Then send your bylines to NBCCcritics@gmail.com. We would be grateful if you would limit submissions to no more than four per week. Please be sure to include the author and full title, the publication, and a working link, along with your name and pronouns. If applicable, please include your twitter handle and we will try to share your work via @bookcritics as our resources allow. Thanks!!