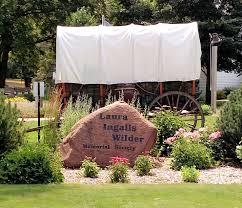 For the Minneapolis Star Tribune where she is the senior editor for books, NBCC board member Laurie Hertzel wrote her Sunday column about the vote by The Association for Library Service to Children (a division of the American Library Association) to rename the Laura Ingalls Wilder Award the “Children’s Literature Legacy Award.”

In a following column, Hertzel shared reaction from readers, but  saved the last word for Caroline Fraser, author of NBCC Biography and Pulitzer Prize winner “Prairie Fires: The American Dreams of Laura Ingalls Wilder.” It read: “Each generation revises the literary canon,” Fraser wrote in the Washington Post. “While the answer to racism is not to impose purity retroactively or to disappear titles from shelves, no 8-year-old Dakota child should have to listen to an uncritical reading of ‘Little House on the Prairie.’ And Fraser added: “But no white American should be able to avoid the history it has to tell.”

Aside from the Wilder beat, NBCC Hertzel reviewed “The Girl Who Smiled Beads” by Clemantine Wamariya and Elizabeth Weil and “Dear Mrs. Bird” by A.J. Pearce for the Minneapolis Star Tribune.

Priscilla Gilman was featured in LitHub’s Bookmarks feature ‘Secrets of a Book Critic' and she reviewed Ottessa Moshfegh's “My Year of Rest and Relaxation” for the Boston Globe.

For PopMatters, Linda Levitt reviewed “Flash: The Making of Weegee the Famous”  by Christopher Bonanos and Bright Signals: A History of Color Television  by Susan Murray.  In addtion, her first book, Culture, Celebrity and the Cemetery: Hollywood Forever, was  just published by Routledge.

Board member Mary Ann Gwinn has been on the crime beat of late. For Newsday, she reviewed “City of Devils: The Two Men Who Ruled the Underworld of Old Shanghai” by Paul French and for the Seattle Times did a roundup of three new true-crime books: “Conan Doyle for the Defense” by Margalit Fox, “Blood and Ivy” by Paul Collins and “The Feather Thief” by  Kirk Wallace Johnson.

Besides the suffering, Board member Daisy Fried brought a little sex and surrealism to the world in the form of reviews of new books of poetry by Diane Seuss, Analicia Sotelo, Jenny George and Bianca Stone for the New York Times.

Clea Simon reviewed Jordy Rosenberg’s “Confessions of a Fox” for The Boston Globe and her own mystery “Cross My Path” (Severn House) has just been published in the U.S.

In other news, this summer's NBCC Reads: What's Your Favorite Book in Translation? Deadline August 3, 2018.

This summer the National Book Critics Circle will highlight favorite books in translation for the latest installment of our “NBCC Reads” blog series. We would be delighted to share your short article (500 words or less) about a favorite book, in any genre, that's been translated into English be it a new work, like Sayaka Murata’s quirky little novel, “Convenience Store Woman,” or something a bit older, such as Stefan Zweig’s evocative memoir, “The World of Yesterday.”

Please email your article to NBCC Board member Lori Feathers: lori@interabangbooks.com. The deadline is August 3, 2018. We will begin posting submissions later this month and continue posts throughout the summer!

And don't forget to renew your membership, and invite your book reviewing friends to join us. Details here.

Your reviews seed this roundup; please send items, including news about your new publications and recent honors, to NBCCCritics@gmail.com. Make sure to send links that do not require a subscription or username and password.

Elizabeth Taylor, co-editor of The National Book Review and Literary Editor at Large of the Chicago Tribune, has served as President of the NBCC. The co-author of “American Pharaoh,” she edited both the Books and Sunday Magazine sections of the Chicago Tribune, and was a national correspondent for Time magazine, based in New York and then Chicago