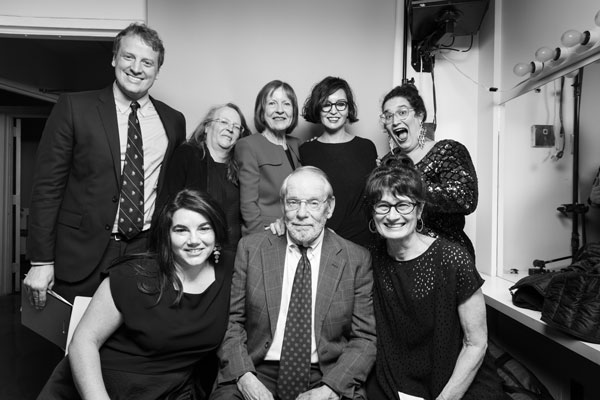 More about the NBCC awards:

The NBCC awards ceremony video is posted on our blog. Make sure to watch the wonderful speeches from the winners.

NBCC board member Laurie Hertzel wrote about the NBCC awards for her weekly column at the Minneapolis Star Tribune, noting that “the speeches were generous and, mostly, extemporaneous (because no one expected to win).”

Former board member Karen Long wrote up the awards ceremony for the Anisfield-Wolf Awards website, emphasizing that “for the first time in NBCC history, the winners across all six book categories were women,” while Bookforum noted Carmen Maria Machado's reference to the “unfortunate relevance” of her Leonard award winning story collection, Her Body and Other Parties, in her remarks at the awards ceremony.

Maureen Corrigan reviewed Chris Bohjalian’s ‘The Flight Attendant’ for The Washington Post. She also recommended two biographies, Laura Thompson’s ‘Agatha Christie: A Mysterious Life’ and Michelle McNamara’s ‘I’ll Be Gone In the Dark’, both surrounding the mysteries of Agatha Christie and The Golden State Killer, for JPR.

Tom Beer wrote about some of the finalists for the Man Booker International Prize, which acknowledges books in translation published in the UK. The winner will be announced on May 22. Additionally, he featured three new books for Newsday, including Anna Quindlen’s ‘Alternate Side’, Nell Scovell’s ‘Just the Funny Parts’, and Sam Taylor’s ‘Hunting the Truth’, and noted the rise of John Oliver’s satire ‘A Day in the Life of Marlon Bundo’.

Ron Slate reviewed ‘Heretics of Language’ by Barry Schwabsky and ‘Packing My Library’ by Alberto Manguel for On the Seawall.

Barbara Spindel reviewed Mark Sarvas’ ‘Memento Park’ for the Barnes and Noble Review. She also reviewed Miles Unger’s ‘Picasso and the Painting that Shocked the World’ for the Christian Science Monitor.

Board member Katherine A. Powers reviewed the audio version of Tana French’s ‘Faithful Place’ for The Washington Post.

Hope Wabuke published a review of Khadijah Queen’s ‘I’m So Fine: A List of Famous Men and What I Had On for Anomoly’, conducted an interview with award-winning children’s book author Derrick Barnes, and did a forecast of books by black authors coming out in 2018 for The Root.

Robert Birnbaum looks over the new crop of baseball books at Our Man in Boston.

NBCC Treasurer Marion Winik took time off from pinching pennies to interview Jane Delury about her new novel ‘The Balcony’ for Baltimore Fishbowl.

Bob Hoover reviewed Brian Castner’s ‘Disappointment River’ and Edward J. Larson’s ‘To the Ends of the Earth’ for the Minneapolis Star Tribune.

NBCC member Rayyan Al-Shawaf’s debut novel ‘When All Else Fails’ has been acquired by Interlink and will be published in the fall of this year or the spring of 2019.