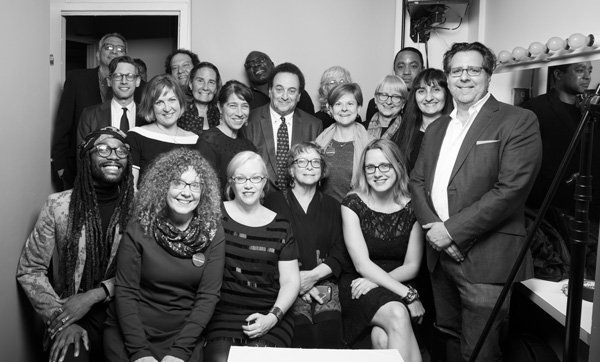 This year's National Book Critics Circle awards Thursday night came after a five-hour board meeting at which the winners were chosen (see board, above, in a photo by John Midgley) and was completed with a sold-out reception celebrating all the finalists and the literary world that keeps us passionate about books. Keep an eye on Critical Mass for video of the awards ceremony, remarks by award winners Carmen Maria Machado, Charles Finch and John McPhee, as well as the citations for the winning books, written by board members.

Video of the finalists' reading here.

Interviews with the finalists by MFA students at The New School here.

Calvin Reid listed all the awards winners and detailed the stunning books in Publishers Weekly.

NBCC board member Laurie Hertzel listed the NBCC award winners and gave a shout out to Layli Long Soldier in the Minneapolis Star Tribune.

In the Chicago Tribune, the Associate Press's Hillel Italie noted the long-running strengths and qualities of Joan Silber's work, and pointed out that Balakian winner Charles Finch had recently praised Silber as well.

The Millions published a list of all the NBCC award winners.

Lit Hub rounded up excerpts of reviews for each of the winners via Bookmarks.

In Bustle, Kristin Wilson was happy to anounce that most of the NBCC awards went to women and noted that the awards for 2016 showed similar results.

Thom Geier gave a shout out in The Wrap to the authors who won the NBCC awards this year, stating that NBCC is an organization honoring great books in the US. He noted that while women took home the awards in all of the book categories, men were not completely absent from the ceremony.

In her article for the Tampa Bay Times, former board member Colette Bancroft described each award-winning author and pointed out that the NBCC awards are the only major awards given out by critics.